Opinion: Dutch architecture firm OMA was among 74 entrants for a competition to design a new footbridge across London's River Thames – but its entry was more about making a statement than trying to win, explains practice partner Reinier de Graaf.

Last month our office took part in a competition for the Nine Elms to Pimlico Bridge in London. We did not win this competition and, funny as it may sound, also did not expect to.

For decades, bridges have been used as a pretext for architects, engineers, and sometimes even artists to demonstrate their virtuosity – making the line-up of recent bridges a vanity fair, much like the line-up of recent high-rise buildings. In this respect, a simple glance at the picture above makes sufficiently clear that we did not stand much of a chance, not least because we refused to play. 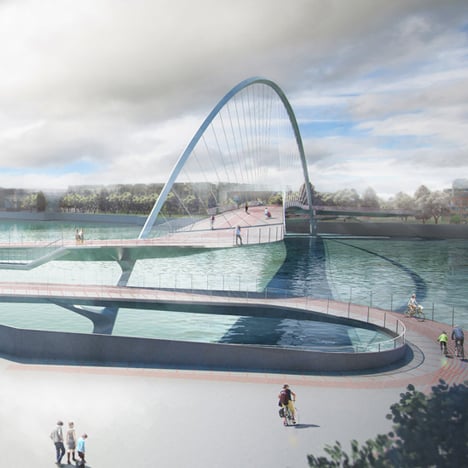 The call for submissions had been open to everyone. For the sake of fairness, to shield smaller firms from the reputation of larger ones, entries were guarded by strict anonymity (more about that later). Seventy-four entries were submitted, each one labelled with a code – the only way to eventually match the design to its author. Ours was #043. In a strange way this code, merely a dry number, went together well with the abstract, "anonymous" aesthetics of our proposal. This work could stand on its own, independent of the presence of an author.

The essence of a bridge ultimately resides in what it enables, not in the way it looks

The competition brief had called for "the design of a landmark", which, given the fact that bridges are "landmarks" by definition, seemed strange. The essence of a bridge ultimately resides in what it enables (a shorter journey from A to B), not in the way it looks. Its beauty is more likely to be found in under- rather than overstatement, but clearly not all see it that way.

Two weeks before the deadline our team went to work. We opted for simplicity: a single Vierendeel truss spanning the distance between the north and the south bank of the river Thames; foot and bicycle paths organised on either side to create a symmetrical cross section that was logical in terms of structure. Rather than adding a new structural "tour de force" to London's increasingly virulent townscape, this bridge, almost like a series of picture frames, would capture and re-frame the existing and emerging context of London.

Upon public release of the 74 entries (still known only under their code names at that point), CityMetric, a London-based blog, featured a list of "the 12 most ridiculous designs for the new Battersea Bridge". Ours was firmly ranked number one, described as "The one that is definitely not a bridge", followed by "a helpful tip to architects: you can't just draw squares on a photograph and call it a design." In terms of sarcasm, we were in no way singled out – English humour is wonderfully indiscriminate in that respect. Considering the comments made about other entries: "The Millennium Bridge with sprinklers" and "Why cross straight, when you can go on a 200 meter detour?" we considered ourselves lucky, even encouraged by how apparently well our intentions had been understood.

There are two possibilities: categorical rejection or unconditional embrace

A radical proposition forces a radical outcome. There are two possibilities: categorical rejection or unconditional embrace. The verdict of blogs such as CityMetric was clear, and although the jury was prohibited from informally sharing its deliberations, we can also make a fairly educated guess there. The elimination of the second possibility – we did not win – leaves only the first. As such, an all-or-nothing approach to competitions also renders unnecessary any form of jury confidentiality: praise or scorn, in either case, no further knowledge of detail is required.

Should we have won, or even made the shortlist, an interesting situation would have arisen. Because the design's intentions were so emphatically stated from the start, picking it as a winner would have implied an equally emphatic endorsement and, since the proposal promotes a break with a prevailing trend, also a rejection of the city's recent past.

The design's radical aesthetics almost call for a radical form of politics, challenging a system that notoriously thrives on compromise and caution. Time inevitably creates space for second thoughts – there's nothing more certain than doubt. Politicians, prone to "weak knees", get cold feet, and weaselling public officials are all too happy to convert these doubts into a form of permanent stagnation.

In these murky waters any form of eye-catching design almost acquires the status of a contract, which, through the sheer power of its imagery, constitutes the only notion of a binding agreement between otherwise disparate parties, in a way written contracts (there's nothing more ambiguous than British English) never do.

When it comes to realising competition designs, the unravelling usually starts immediately after a winner has been announced. This case was even more extreme. Hours after the competition entries had been made public, Westminster City Council publicly announced it did not want a bridge. They never had.

The composition of the jury, with representatives from Wandsworth and Lambeth Councils on the south side of the river, but not from Westminster – the authority responsible for the land on the north side – should have given everyone some indication of that.

Having launched into major new real estate developments at Nine Elms, Wandsworth, the competition's initiator, had more to gain from a connection to the north than vice-versa. It was only a matter of time before the proposal for a link between a conservation area in the north and a new development area in the south would run into a stand-off between progressive and conservative views.

Shortly after Westminster's public statement, the announcement of second-round candidates was postponed (appropriately rescheduled for Friday the 13th). Then, the need for complete anonymity was revisited. While in its earlier stages the competition had suggested a selection driven by the quality of the design proposals, the emphasis was now on choosing "the right team".

Let's look forward to London 2020: after a long period of political opposition, dragged out procedures and public opinion serving as a permanent alibi not to move forward, Pimlico and Nine Elms are as disconnected as ever. For cyclists and pedestrians, Vauxhall Bridge, 800 metres up the road, remains the nearest crossing. Why go straight, when you can go on a two kilometre detour?

Meanwhile, the image of our bridge, having gone viral after its publication on Dezeen in 2015, has become a reality in its own right, there for everyone to see. Abstract and serene, undisturbed by the bickering and petty concerns that have come to surround the impasse around the eventual winner. Its crisp virtual presence is strangely at odds with the struggle it would have taken to realise. It is what it is; definitely not a bridge.

Reinier de Graaf is a partner of Office for Metropolitan Architecture (OMA) where he directs the work of AMO, the research and design studio established as a counterpart to OMA's architectural practice.