Amanda Levete and Hopkins are among the architects shortlisted to design a new pedestrian and bicycle bridge across London's River Thames (+ slideshow).

Four teams of architects and engineers have been selected to design the new river crossing in south-west London between Nine Elms and Pimlico, rivalling Thomas Heatherwick's proposal for a Garden Bridge elsewhere in the city. 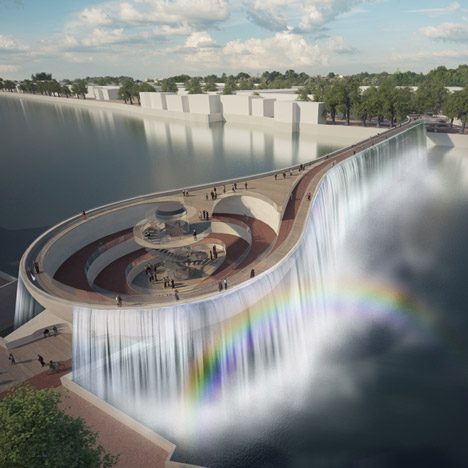 The finalists were selected anonymously by a jury including architect Graham Stirk of Rogers Stirk Harbour + Partners, engineer Henry Bardsley, the Design Council's Pam Alexander and council leaders from the London boroughs of Wandsworth and Lambeth.

The shortlisted teams will now develop their ideas into detailed designs, and an overall winner is set to be named in late autumn.

"The quality of the submissions went beyond our best expectations and the interest this competition has generated across London has been tremendous," said Wandsworth Council leader Ravi Govindia.

"The devil will be in the detail and the next stage will show us whether these four highly skilled and innovative design teams can meet the complex challenges this project presents."

The competition for the new pedestrian and bicycle bridge across the Thames was launched by Wandsworth Council in December 2014.

The project is expected to cost £40 million and is part of a wider £1 billion infrastructure overhaul for the area of south London known as Nine Elms, which stretches from Battersea to Vauxhall and includes the new US Embassy and the Battersea Power Station project.

Wandsworth referenced a 2013 Transport for London study as the justification for the scheme, and says it has assigned £26 million of funding from the Nine Elms projects towards building the winning bridge.

A shortlist of 74 anonymous designs was unveiled in February. But Westminster Council, the authority responsible for the land in Pimlico on the north side of the river, said it did not want a bridge.

"Our officers have, and continue to express strongly the Council's opposition to the proposed bridge, on the grounds of its visual and environmental impact including the impact that a new bridge would have at a landing site in Westminster, on traffic flows, pedestrian movement and on residential amenity," said a statement posted on the website of Westminster's Labour party councillors.