Models wearing monochrome garments from the designer's collection – titled There Will Be No Miracles Here – walked around the metal structure, installed in the centre of the cavernous space.

The ride was used to represent shapes in the clothing designs and to create an overall feeling of adrenaline for the show, according to Plein.

At the start of the ride, the carriages were mechanically pulled up a steep slope before plunging down the other side. The momentum propelled the wheeled chain of cars around the track, which looped and cambered within the tight footprint. 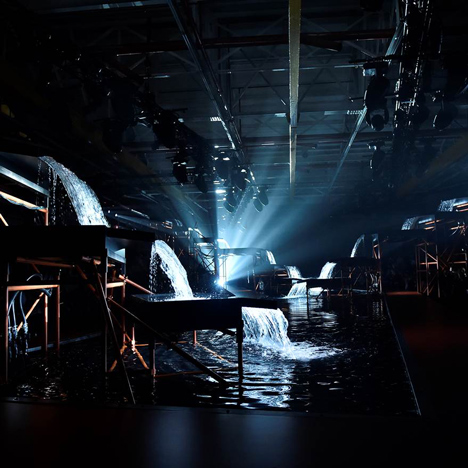 Tube lighting was attached to the structure's vertical elements and wrapped around the five two-seater carriages, with Plein's monogram emblazoned on the front. The black track was also illuminated by lights underneath the rails.

Spotlights positioned on the floor between the bending track shone beams up to the curved roof of the arena, changing formation while the show took place.

Scaffolding towers around the outside of the runway held further lighting fixtures, positioned between the bleacher seating used by the audience.

Guests were invited to ride the rollercoaster after the presentation, which took place on 25 February.

Other dramatic set designs for the Autumn Winter 2015 shows included Hunter's catwalk that wove beneath flowing waterfalls and a travelator that carried models around the House of Holland presentation.