Spanish architecture studio BCQ has revealed its plans to enhance a Barcelona bridge, adding pollution-dissolving concrete, planted walls and paving that glows in the dark.

Barcelona City Council asked BCQ to upgrade the road bridge that spans the Avinguda Meridiana, a dual carriageway that brings traffic into the city from the north, to turn it into a new gateway for the Catalonian capital.

The aim is for the structure – known as the Sarajevo Bridge – to offer a more pleasant experience for pedestrians, through better lighting and improved air quality.

"The renovation and improvement of the Sarajevo Bridge is part of a series of actions to resolve priority for pedestrians, with the aim of it becoming a meeting point between the two Trinitat neighbourhoods," explained BCQ.

"It enables better interaction between pedestrians and vehicles, provides the space with vegetated arcades and changes the image of the bridge to distinguish it as one of the gates of Barcelona," added the team. 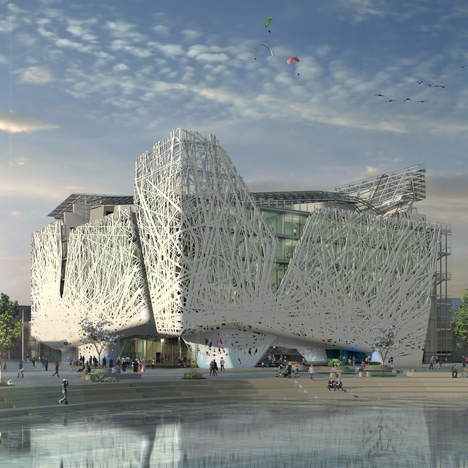 The bridge's existing surface will be replaced with photocatalytic concrete – a self-cleaning material that also neutralises pollutants in the air, by absorbing nitrogen oxides and converting them into harmless substances.

The technology – which is also set to be a feature of the Italian pavilion at the Milan Expo 2015 – can be applied to white or grey cement. The pollution it removes will simply be washed away by the rain.

Within this concrete, photo-luminescent elements known as glow stones will provide a source of ambient light. Similar to the glowing roads being trialled in the Netherlands, these additions are non-radioactive and non-toxic, and work by absorbing solar energy during the day and slowly releasing it after dark.

Foliage will be provided by green walls and pergolas covered in climbing plants. "Plant walls improve the quality of the urban landscape and give continuity to recently created new green areas at both ends of the bridge," said the studio.