Dezeen has won Best Content Studio at the Digiday Publishing Awards in New York, beating The New York Times to the honour.

The trophy was presented to the Dezeen team at the awards ceremony in New York last night, where it was also a finalist in the Best Use of Video category.

Dezeen won the award for Dezeen Studio, our content-creating arm, which produces video, brand collaborations and other creative projects.

Our entry for the Best Content Studio category included Dezeen and MINI Frontiers, our ongoing collaboration with car brand MINI; the Imagine Shop curated for Selfridges; our augmented-reality watch store; and our print publication Dezeen Book of Interviews.

Ben Hobson, head of Dezeen Studio, and Oliver Manzi, head of video, picked up the trophy at the ceremony held at the High Line Ballroom on West 16th Street, along with company directors Marcus Fairs and Rupinder Bhogal. 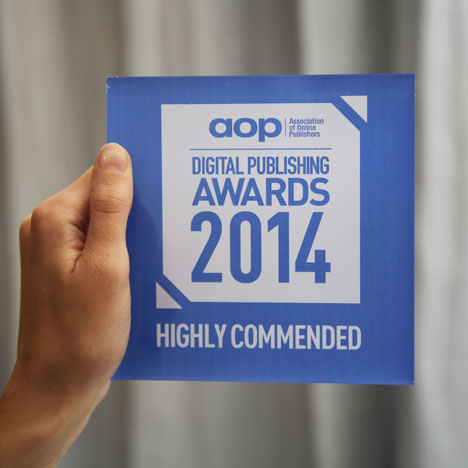 Dezeen beat a strong shortlist consisting of The New York Times, The Atlantic and Quartz.

Dezeen was also shortlisted for the Best Use of Video award for Dezeen and MINI Frontiers, a category won by The New York Times.

The annual awards are organised by online media and marketing publication Digiday. Fashion site Refinery29 took the top Publisher of the Year honour while The New York Times won Best in Show for its Surviving an ISIS Massacre video.