British inventor Sam Pearce has created a shock-absorbing wheel for bicycles and wheelchairs that is designed to help users negotiate uneven streets and rough terrain (+ movie).

Nominated for this year's Designs of the Year award, Pearce's Loopwheel features a suspension system within the wheel itself. This offers a smoother journey for bicycle riders while making it easier for wheelchair users to travel unaided.

"I think I have reinvented the wheel," Pearce told Dezeen. "The physics say I have. Lots of sceptics say I haven't, but I think the design will go from strength to strength. These wheels are going to be around for a long time to come."

The idea for integrating suspension into the wheel came to Pearce as he was travelling through an airport and noticed a mother struggling with a push chair.

"Her push chair had lots of suspension and lots of big springs," explained Pearce. "But as she hit the curb with the push chair, the child went forward, meaning the suspension wasn't working in the horizontal plane."

Pearce set about creating a wheel with the suspension integrated within its structure, producing prototype designs for mountain and city bikes. After showcasing the wheels at an event, Pearce was approached by a wheelchair user who wanted to use the system to make travelling over rough terrain easier.

The Loopwheel – designed both for bicycles and wheelchairs – consists of springs that replace traditional spokes. The springs are made from a carbon-composite material and positioned within the wheel's diameter. Together, they form three looping frames that are connected by a central node. 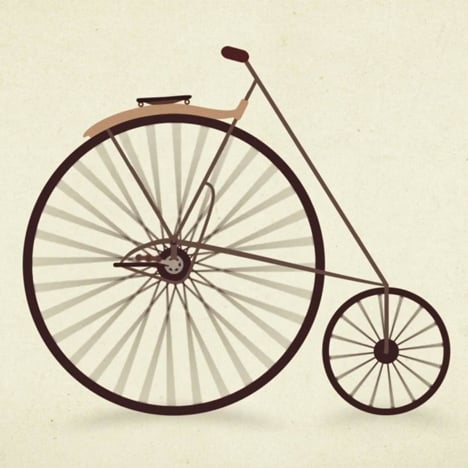 Each spring is also fixed to the wheel's inner rim and flexes to absorb shocks, creating a suspension system that cushions the user from bumps in the road.

"We get our springs made by an archery company," explained Pearce. "So the springs flex in a similar way to an archery bow's limb."

The central hub moves as each spring flexes in response to the weight or force placed on the wheel, while its aluminium rim remains rigid. As a result, peddle or push power is transferred more smoothly to the wheel, allowing the user greater control.

Unlike commonly used suspension forks in bicycles, the Loopwheel provides suspension in every direction and responds to all forces in the same way. "The Loopwheel has 360 degrees of shock-absorption," explained Pearce.

This also isolates the rider or user from road noise – the vibrations created by passing traffic that travel up through the frame into the user's body.

According to Pearce, another benefit of placing the suspension system within the wheel is that high-pressure or puncture-resistant tyres can be fitted to the bicycle or wheelchair without compromising on comfort. Currently, the squishy tyres commonly used on wheelchairs to provide a smoother ride also make it tough for users to maintain forward momentum.

Pearce used crowdfunding platform Kickstarter to raise money for the project in 2013, allowing him to fund his wheel production company Jelly Products. In February 2015, Loopwheels launched another Kickstarter campaign to raise funds for designs specifically for wheelchairs.

"For the wheelchair user, this design comes into its own on rougher terrain and curbs," said Pearce. "With Loopwheels, users can get up the curbs without losing momentum nor sending a shock through the frame and up their spine."

The suspension system has been shortlisted in the transport category of the Designs of the Year 2015 award, organised by London's Design Museum. Other shortlisted products in the same category include Google's self-driving car and Tesla's Model S electric car.

Dezeen is media partner for Designs of the Year 2015. Last year, German manufacturer Volkswagon was named the winner of the transport category for its fuel-efficient XL1 car.