This blackened plywood box added by architect Antonin Ziegler to one end of a rural home on France's northern coast provides a private library and garage for its inhabitants (+ slideshow).

Parisian architect Antonin Ziegler added the 60-square-metre reading room to an old stone house in Senneville-sur-Fécamp, a region on the coast of the English Channel in northern France.

Ziegler was commissioned to design the extension – named Cliffs Impasse after the property's clifftop location – to provide a home for the owner's expanding book collection.

The library walls are clad inside and outside in plywood boards and three of its four sides feature large windows.

The pale ply was left untreated on the interior but the exterior is blackened with pine tar – a sticky preservative used to weatherproof maritime structures – as a contrast to the pale grey stonework of the original house. 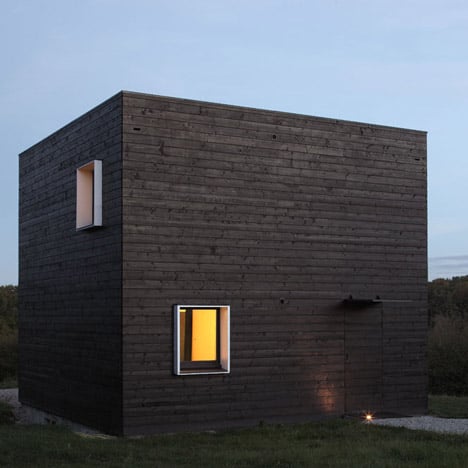 House in Normandy with blackened timber walls by Beckmann-N'Thépé Architectes

"On the last path before the earth falls away into the sea, a small country house is tucked into an embankment," said Ziegler.

"Inside, piles of books are stacked in every corner and recess. The rhythm of the day is marked by the turning of pages and punctuated by the comings and goings of the house cats."

"At the end of an impasse, on top of a cliff, at the end of the world. What better place to escape from the world, to create a space that allows thoughts to run wild?" he added.

A narrow passageway with glazed walls connects the timber-clad volume to the stone gable of the existing home.

The passage leads through from the kitchen, and arrives at the foot of a new staircase leading up to the first-floor library.

Books are shelved on floor-to-ceiling units constructed from pale plywood. The timber ribs of the building's structure slot between the shelves and extend across the ceiling, supporting another strip of shelving that hangs from the ceiling. The ribs also run between a series of windows on the opposite wall.

These form part of an L-shaped section of glazing that wraps one corner of the extension, providing views over the nearby village and the steeple of a church, while a smaller window is set into the rear wall to provide a view through the structure.

"Open on three sides, it is like a book opened onto the landscape," said the architect. "From it, we can perceive the village and the horizon along the sea below."

Rows of strip and pendant lighting hang from the timber ceiling, illuminating the large window at night – a feature the architect says draws attention into the extension and away from the house.

"Beyond simply providing a view for its inhabitants and offering a place for evasion, the space also creates a new image within the landscape," he said.

"The focus on this newly unveiled space creates a relationship that tends to make the existing house disappear."

Photography is by Antonin Ziegler.