Movie: designer Arik Levy explains why he wanted to design a range of bent-wood chairs in this movie produced by Dezeen for Czech furniture brand TON.

Levy's Split collection of chairs and stools, which will be presented in Milan later this month, are the first time the Paris-based designer has used bent wood.

Levy describes the traditional process of wood bending – in which wood is softened in a steam vat and then bent by hand – as a "choreography" that he wanted to master. 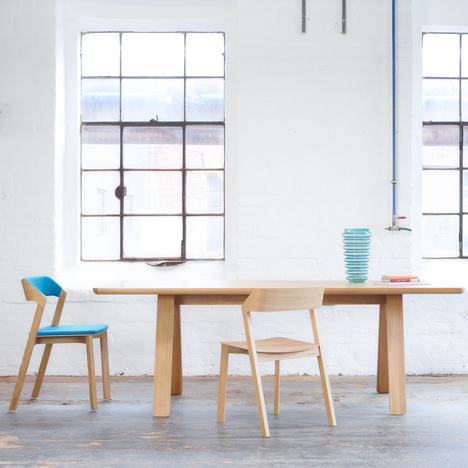 "The harmony between the two people that bend and lock the wood into place is a song to your eyes," he says. "I wanted to learn this song."

Levy's furniture collection is called Split because the legs of each chair are formed from a single piece of wood that is divided in two at one end and bent in different directions to support the seat and backrest.

"In many cases I just invent a name which is a metaphor," Levy says. "But in this case the wood literally splits into two parts."

The collection is a first for TON too. Bent-wood furniture has been produced at the company's facility in Bystřice pod Hostýnem in the Czech Republic since 1861.

Dezeen Book of Interviews: Arik Levy features in our new book, which is on sale now

However, it has never before manufactured a product featuring single pieces of wood that have been split and bent in this way.

"What TON and I did together is not really just a product, it's an idea," Levy claims. "[It's about] how to use what they've done for many years and project it into the future."

The collection includes chairs, armchairs, lounge chairs and bar stools, which are available in a range of different colours and finishes, including stained wood and upholstered versions.

The stained chairs will be available in solid colours or with a gradient, where the stain becomes lighter towards the centre of the chair.

"This is something I used to do on my surfboards or on my skateboard decks," Levy explains. "I became the nightmare of the guy who's [applying the stain] in the factory. He's used to doing something complete and homogenous and suddenly this lulu comes and says, 'let's do a gradient!'"

The Split collection will be presented at this year's Salone del Mobile furniture fair in Milan, Hall 12 Stand C05, from 14 to 19 April.

This movie was produced by Dezeen for TON. It was filmed at the company's factory at Bystřice pod Hostýnem in the Czech Republic. The music used is a track called Hanging Out of Moving Vehicles by US artist RyIm.