Blackened timber, zinc and cement boards add variety to the facade of this beachside home near Melbourne, which is made up of several intersecting and overhanging blocks (+ slideshow).

Melbourne studio Wolveridge Architects designed the residence for a young family in Mount Martha, a beach suburb on the Mornington Peninsula near Melbourne.

The client – a developer and builder – had already been working with the firm on a neighbouring property, before commissioning the design of own family home. "The client had a third child on the way and so was keen for a different style of living," explained Wolveridge Architects' David Anthony. 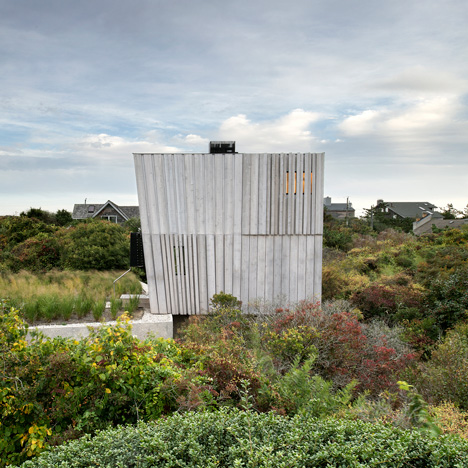 To compensate for this, the building was conceived as a series of staggered and intersecting volumes that climb up the hill incrementally.

"The steep slope of the site was challenging, but learning from the building next door – the methods of construction and how the views, winds and weather impact the site – we were able to create a living and outdoor space that transitioned seamlessly," Anthony told Dezeen.

Utility rooms and a cellar are built into the lowest part of the site, while living spaces and a master bedroom occupy the main ground-floor level.

Three further bedrooms and a bathroom are located on the smaller upstairs floor.

Different sections of the exterior are clad with different materials. Zinc panels, cement boards and planks of red cedar were all chosen for their resilience to coastal weather.

The timber was also treated with black oil to increase the depth of colour while leaving the texture and grain of the wood exposed.

"The varying materials such as concrete, zinc and stone provided durability where the weather was most extreme and a variety of texture that complements the landscape, integrating seamlessly with various interior elements such as the stone in the living room," said Anthony.

Slats of powder-coated aluminium run horizontally across window frames, creating a grill that provides shade from the heat of the mid-afternoon sun.

A hearth is set into a thick limestone wall that runs along one side of the open-plan living space and juts onto a strip of decking at the back of the house.

The terrace, which borders a swimming pool, is protected by the walls of the staggered volumes and overhung by the first-floor bedrooms.

"A key requirement was the play area at the same level as the living space, which wraps around from the pool area to the western facade below the street, creating an enclosed space for basketball and other ball games," said Anthony.

"The design promotes a variety of open and intimate living spaces that maximise solar access and the excellent views to the north," he added, "while providing protection from the harsh costal winds to ensure the spaces remain usable throughout the year."