Green panels create a grid across the facade of this restaurant in Bupyeong, South Korea, folding open to reveal the upstairs dining room to the street (+ slideshow).

The Forest House restaurant was designed by Seoul office JYA-rchitects for a plot in the Cheongcheon-dong neighbourhood.

Local planning regulations dictated that the building should have a flat frontage and a ground floor that steps back from the street, so the building was conceived as a simple cubic form with space for an outdoor dining area downstairs.

The dining areas on the building's upper storey are screened from the street by the colourful panels, which present a mixture of green tones. Each one can be individually opened to adjust the amount of sunlight and ventilation that reaches the interior.

"The client wanted to give a feeling of 'a forest house in the city' to the facade of the building," said JYA-rchitects, whose recent projects include a series of low-cost houses and a children's centre with a rooftop slide.

"We first simplified the building's image as pixels and turned them into some 300 louvres that can freely rotate a maximum of 180 degrees," explained the architects.

Each galvanised steel panel is given a slightly different powder-coated hue and together they are designed to form an abstract representation of nature to complement trees on the nearby pavement. 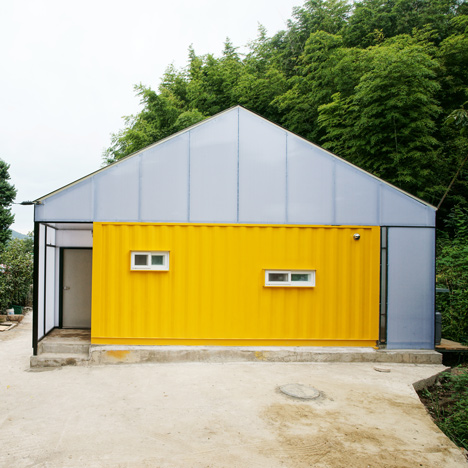 "The space and shadows newly created by these rotating louvres naturally give various expressions to the flat facade," added the team. "The louvres moved by a person are now transformed into the forest leaves swayed by a breeze."

Behind the outdoor dining area, the ground floor is occupied by the kitchen at one end and an open dining area that takes up almost two thirds of the space.

An internal flight of stairs leads up to a more segregated arrangement of dining areas on the upper floor, which can also be accessed from the patio via a spiral staircase.

A gallery supported by structural steel columns runs along one side of the upper floor, jutting out to create a shelter for diners below. It is occupied by a single space that extends along the length of the building, flanked by the pixellated facade on one side.

The other side is lined with glazing incorporating doors that open onto a dining room. At the rear of this space, diners sit on the floor around long tables. Elsewhere, taller tables and chairs are arranged in clusters.

Industrial materials feature prominently throughout the interior; the structural steel beams are left exposed in the gallery space and are complemented by the steel reinforcing bar used for the balustrades of both staircases. Metal mesh is integrated into glass doors and protective panels lining the gallery.

Aside from the green facade, the only other bright colour within the largely monochrome interior is the central staircase, where the wall, ceiling, lighting and balustrade are finished in yellow.

The same colour is used for the spiral staircase that links the outdoor dining space with the gallery above. A concrete floor, exposed brick service counter and bare light bulbs suspended from coiled cords add to the rough-and-ready aesthetic.

An overhead ventilation system with individual extraction hoses above a hot plate on each table – a common feature in Korean restaurants where food is often cooked at the table – was also included to prevent a build-up of smoke and steam inside the restaurant.

Photography is by Hwang Hyochel.