The properties, completed by JYA-rchitects between 2013 and 2014, are located in the country's southern provinces and were developed in collaboration with non-profit organisation The Child Fund Korea. 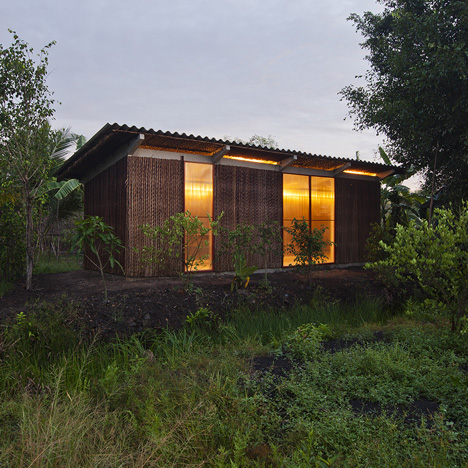 The young team used the project as an opportunity to hone their architectural skills, while also providing a service to people in need.

"There were people living in quite poor living environments that we can't even imagine in our neighbourhood, and we were shocked and shamed when we faced the reality of them," architect Youmin Won told Dezeen.

"But a more serious problem is that we didn't know how many people are living in that condition and how we can help them efficiently," Won continued, "so, when we were asked to design these projects we thought it is our obligation as architects."

Each of the homes in the Low Cost House Series demonstrates a different solution to the problems associated with building on a small budget. The architects developed a standardised process that helped them to identify and focus on tackling the most vital issues for each family.

"The process of thinking of these projects was similar to the way a doctor works," explained Won. "It is very simple: diagnose the problems, and find the efficient architectural solution. This is the main challenge and consistent approach that we have tried to keep in the Low Cost House Series."

The first house to be completed in 2013 is in Beolgyo and was designed for a family whose previous home was destroyed by fire.

The main requirement was to introduce daylight through a new roof as the site was flanked by a bamboo forest. Layers of plastic bubble wrap that provide insulation on the roof also enable natural light to filter through into an open-plan living area.

Bedrooms for two boys and two girls are separated by a sliding screen that can be closed to provide privacy or opened to create an open play area.

In Jangheung, a home for a family of seven was constructed using prefabricated container homes typically used for temporary accommodation, which were positioned at either end of a covered wooden deck that can be opened up to the outdoors.

The containers are surrounded by a framework with a pitched roof that creates the impression of a house-within-a-house. This layered configuration improves insulation and provides diverse living spaces, including an attic on top of one of the containers.

Low Cost House 3 in Hwasun-gun is a renovation project that involved removing an existing ceiling to expose the property's original timber rafters. Insulation was improved and a bathroom, toilet and terrace were added at one end of the open living room.

The fourth property in Jeongeup was built for a family of five who had spent the previous eight years living in a plastic greenhouse. The house's low-cost timber frame is left exposed internally and clad with sandwich panels finished with corrugated steel sheets.

Interior walls are either painted white or made from oriented strand board, giving these surfaces a rough texture. The balustrade of the staircase and a first-floor mezzanine are wrapped in cheap white netting to form a protective barrier.

The Low Cost Housing Series was recently presented as part of the exhibition Out of the Ordinary: Award-Winning Works by Young Korean Architects, which was organised by London Metropolitan University's The Cass Faculty of Art, Architecture and Design.

Photography is by Hwang Hyochel, unless otherwise stated.