The blackened timber walls of this family holiday home by WT Architecture are hidden within the shell of an old stone mill in the Scottish countryside (+ slideshow).

The old grain threshing mill forms part of Southside Steading, a collection of disused farm buildings that nestle into a hill overlooking a valley in the Scottish Borders.

Edinburgh studio WT Architecture was tasked with converting the old stone structure – which is partially submerged into the grassy bank – into a modern retreat.

The roof and interior structures were beyond repair, so these were stripped away to create a hollow shell within which the new house – called The Mill – was built.

The original walls were repaired using pieces of stone from the site and re-pointed with lime mortar, while the new timber structure is clad in black-stained wood intended to be visually subservient to the stonework.

"The brief was to convert the mill building to create a modern, rural holiday home that retained much of its historic character," said studio founder William Tunnell. 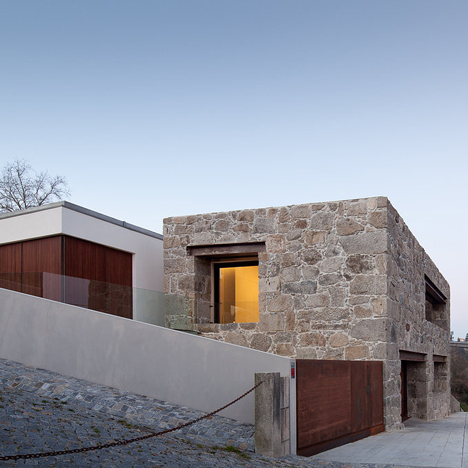 "The mill's distinctive long form emerging out of the hillside gives it a striking yet exposed position on the site and supported an architectural solution contained within the original walls."

The pitched roof and upper wall of the new structure protrude above the stone parapet. This creates a narrow gap along the top of the gabled end wall, where WT Architecture has inserted a clerestory window.

Most of the windows in the new structure align with those in the old stone wall, while additional openings with galvanised steel frames were added to the south gable to frame views out over the valley.

Inside, the architects planned a series of "simple, utilitarian and durable" spaces. Panels of spruce plywood line each of the rooms, while a house-shaped core containing storage areas is coated in a layer of white plaster.

Floors are covered in a combination of pine boards and polished concrete, depending on the use of the room.

Due to the steep incline of the site, the building comprises split-level floors connected by small flights of pale timber and black metal stairs.

"The dramatic level changes along the length of the building gave the opportunity to introduce half levels and taller spaces, allowing light to move between the spaces and penetrate the tall cross-section of the building," said Tunnell.

A door that occupies the original entrance to the mill leads directly into a larch-lined boot room that adjoins the dining area. To the right is a bedroom suite, while two short sets of steps lead either down to the kitchen or up to the living room.

A bathroom, utility room and bedroom are tucked in a partial basement at the north end of the building, while three bedrooms are situated on the uppermost storey.

Two of these bedrooms are accessed by a staircase on the western side of the building, while steps on the eastern side link to the third.

A double-height atrium allows daylight from the bedroom windows to funnel to the lower floors, and from the top of the steps there is a clear sightline through the glazed gable.

The Mill is one of 24 projects shortlisted by The Royal Incorporation of Architects in Scotland (RIAS) for its 2015 awards. The winners will be announced at the RIAS Awards dinner on 17 June.

Photography is by Andrew Lee and WT Architecture.