Dark grey bricks alternate between protruding and receding rows to give a ribbed texture to the facade of this family house near Brussels by Belgian studio Lezze (+ slideshow).

The house boasts a narrow profile, wide facade and a flattened pitched roof, and the architects chose contrasting grey and terracotta bricks for the exterior and interior walls.

The furrowed texture of the grey brick facade was created by layering three different sizes of block. According to the architects, this construction method was a time-consuming process that was carried out by local artisans.

The roof of the three-storey structure slopes up from the first floor but flattens at its peak. Its surface is covered in small pieces of grey slate, intended to match the scale of the bricks. 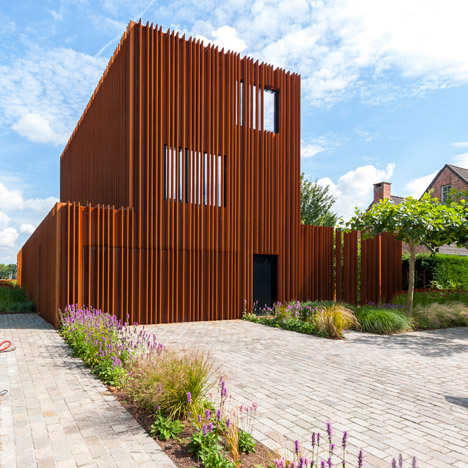 Zinc edging and guttering provides a buffer between the jagged brickwork and slate, while down-pipes channel rainwater to the ground at each of the building's four corners.

Large, irregularly placed windows and glazed doors break up the dark brick facade. The openings are set back into the textured brickwork to provide shelter for the glazing. 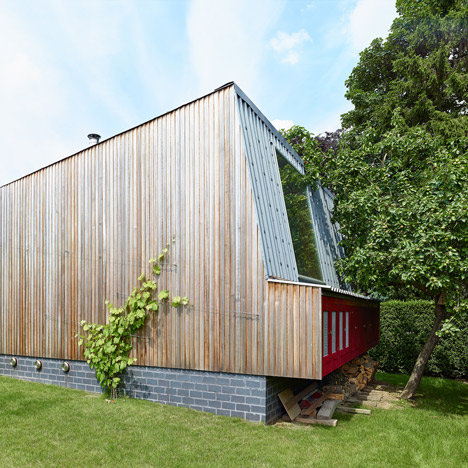 Mottled terracotta-coloured brickwork covers the interior walls, while the underside of the roof is covered in sheets of pale timber. The two upper floors are supported by wooden trusses affixed to the sloping roof.

An open-plan lounge, dining area and kitchen occupy the ground floor. Two sliding glass doors, one of which has a vibrant green frame, help to bring natural light into the living space.

A storage area is set behind a pale wooden staircase that leads to three first-floor bedrooms and a fourth that is nestled under the wooden rafters on the uppermost level.

Sheets of the same timber were used to line a bathroom that is concealed behind translucent panels at the centre of the first floor. The translucent walls allow light to shine into the surrounding corridor.

Brightly coloured tiles line the shower cubicle, adding an accent of colour. "The bathroom functions as a luminous box that was implanted on the first floor to light the corridor," said the team.

Timber partition walls section off three bedrooms around the bathroom and stairwell. The bedroom doors, made from matching wood, are hidden in the walls.

"The challenge was to build a family house with four bedrooms within a fairly small budget and subjected to all kinds of building regulations," said the architects. "In this case, creative design and true craftmanship would have to compensate for the lack of means."

"This project demonstrates that in spite of being limited by budget and urban planning, interesting buildings can be built with standard materials, based on inventive design and true craftmanship," they added.