Snøhetta has unveiled plans to build a new kitchen for The French Laundry – a prestigious California restaurant that is often listed as one of the best in the world.

The Oslo- and New York-based firm will rework the kitchen, facilities and garden of the restaurant, which for the last 20 years has been serving modern French-American cuisine from a century-old stone cottage in the heart of Napa Valley.

The historic building will be left unchanged, but Snøhetta will expand the kitchen by 25 per cent, adding a structure with a fritted glass exterior, a ceiling modelled on a tablecloth and plenty of natural light.

An annex will also be created, with facilities including a test kitchen, a butchery and a wine store for up to 14,000 bottles.

"The French Laundry is being redesigned to be a backdrop worthy of the restaurant's history," explained chef and owner Thomas Keller, who has led the restaurant since 1994.

"We wanted to find a way to juxtapose the historic and the modern while maintaining the high quality cuisine and service our guests have come to expect," he said. "The new design will be an innovative and functioning space that will allow us to continue to evolve as a restaurant and develop new standards."

Before coming up with a design, Snøhetta principal Craig Dykers spent hours in the kitchen learning the movements and habits of the kitchen staff.

"The kitchen is the starting point for an architecture of connection, energy and authenticity," explained Dykers.

"As Chef Keller makes us aware, the kitchen is where all the senses are first ignited," Dykers said. "The French Laundry kitchen is both primal and innovative, setting the stage for culinary magic." 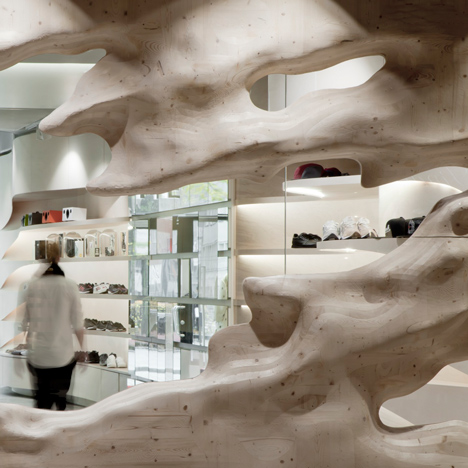 Oslo boutique by Snøhetta reinterprets the Scandinavian story of creation

To maintain ease of communication between staff, the new kitchen will be one large space with improved acoustics, clear sightlines between stations and a flexible layout designed to suit a frequently changing menu.

Externally, the building's fritted glass surface will present sketches of a chef's hands at work, and a long narrow window will allow customers to catch a glimpse of the staff in action.

A tall stone wall will also be built in the grounds, framing views of the iconic blue door that forms the building's entrance.

The project marks the 20th anniversary of the Michelin-starred French Laundry, which is frequently included on Restaurant Magazine's annual list of the Top 50 Restaurants of the World, and topped the list in 2003 and 2004.

"By designing and constructing a new kitchen, arrival courtyard and auxiliary building that will complement in many ways the historic value and elements of our beautiful French Laundry, we now clean the slate, begin anew, and ready ourselves for the next 20 years," added Keller.

While construction is in progress, the restaurant will operate out of a temporary kitchen – a series of shipping containers planned by San Francisco studio Envelope A+D.