Smears of paint and plaster are left exposed on the walls of this design studio and gallery in Japan, which also features a breeze-block wall and an indoor garden (+ slideshow).

Architect Yasuo Imazu, who works under the name Ninkipen!, created the unfinished-looking space in a Kyoto building for an independent clothing label named Ha-Ha Apartment.

Imazu intentionally left the space in a raw state, aiming to offer a physical reminder of the marks left by previous tenants. This creates a patchwork of finishes that include ceramic tiles, concrete, plaster and paint.

A wall of breeze blocks was erected through the centre of the 65-square-metre space to divide it up into two zones. The public gallery sits on one side, while the other half of the space accommodates the designer's atelier, as well as a kitchen and toilet.

All of the designer's tools and furniture are contained within the studio, leaving the gallery mostly empty to accommodate a variety of uses.

A pair of simple light bulbs hang low from the ceiling, while a newly installed wooden column has been carved with curves.

"We succeeded in making two spaces with different density from each other," explained Imazu, whose past projects include a pharmacy squeezed into a narrow alleyway and an office with a bubble facade.

"We placed many objects, like a sewing machine, a leather-making machine, work benches, and a PC in the studio," he said. "On the other side, in the gallery, we did not place anything but the pillar, which was carved by a master carpenter."

A large wooden door slides open to connect the two spaces. These are united by the indoor garden – an area of sunken planting that spans the front of the space behind a glazed shopfront. 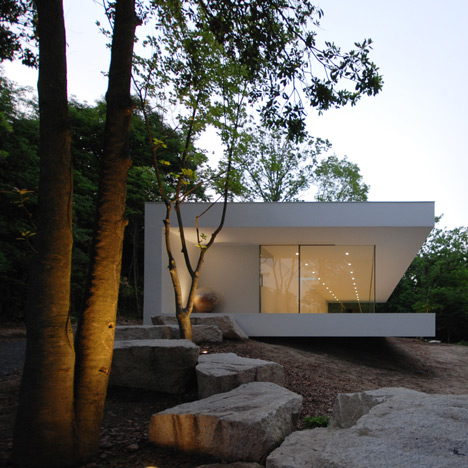 "People out in the street can see both spaces in a single view," added the architect.

There is no sign outside the building, but the name of the brand has been transferred onto the glazing in green.