Milan 2015: British designer Bethan Laura Wood has created an installation of giant canapé-shaped sculptures for the relaunch of a 1960s tableware collection cast from lettuce leaves.

The pastel-toned sculptures by Bethan Laura Wood are based on party food from the 1960s and 1970s. They comprise disks of fake meats and cheeses, jellies and halved hard-boiled eggs stacked on top of the plates by American ceramicist Dodie Thayer.

American lifestyle brand Tory Burch commissioned the ceramicist to recreate the line as its first homeware range. Wood was then asked to design the sculptures for an installation to celebrate the launch in Milan last night.

"I designed all these different canapés based on different foods but also with patterns with that 1960s-70s inflection to really compliment the design and the history of the plates," Wood told Dezeen at the opening of the installation.

The sculptures occupy the two arched windows in the shopfront of the Tory Burch store on Via della Spiga. 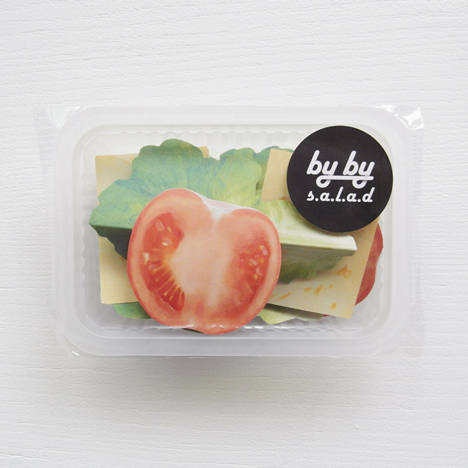 The individual components of each sculpture are made from a type of modelling wood and are hand-painted to represent the textures of sliced meats, fish scales, jellies and cheeses. In contrast to the glazed finish of the plates, the sculptures are covered in matt paints.

Research from 1960s and 1970s cookbooks and jelly moulds passed down to Wood from her mother informed the patterns and shapes.

Platefuls of canapés occupy one window, while in the other a single giant canapé is decorated with the small lettuce plates, presenting the theme in reverse.

Each sculpture was given a name – among them Fanny, Abigail ("because it's her party") and Delia – in honour of TV chefs and characters made popular in the 1960s and 1970s. "They're named after women from the period," Wood explained, "so there's Fanny Cradock, Delia, Margot and Barbara from The Good Life in there."

"I fell in love with this image of Dodie Thayer in her 1960s psychedelic outfit with her 'hostess is the mostess' plates and I really wanted to design something that was celebratory and joyful."

"I had a lot of fun with the idea of hosting and all the different kind of dinner parties you could do with the tableware and celebrating a love of colour and pattern and fun for the summer," she added.

The installation, called Lettuce Entertain You, will tour from Milan to Tory Burch stores in London, Munich and New York.