Scraps of rubber tyres create a shaggy coat around this narrow tower created by architecture students Matt Ritani and Declan Burn on a countryside sculpture trail in New Zealand.

Named Belly of the Beast, the 12-metre-high structure was the winning entry in the inaugural Brick Bay Folly contest, which asked students and young architects to propose temporary architectural structures for the Brick Bay Sculpture Trail near Matakana.

Ritani and Burn, both postgraduates at Victoria University in Wellington, imagined the folly as a combination of architecture and sculpture. Materials formed the starting point, as the pair wanted all of the components to be recyclable.

"Jeremy Till wrote that all architecture is building waste in transit," they said, referencing the British architect who runs Central Saint Martins art college.

"In the interest of sustainability, it was important for us to situate the construction of the folly within a process of future assemblies, meaning the folly is a temporary material state for what will transform into other plausible uses," they stated. 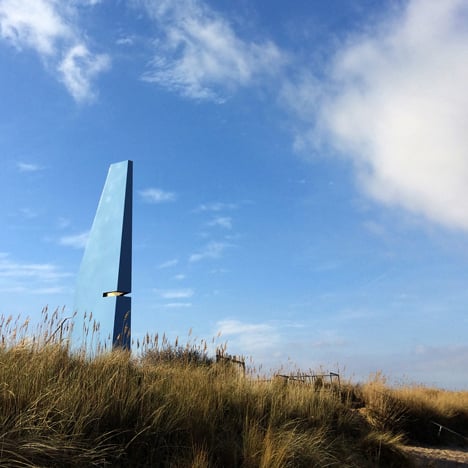 With this in mind, tyre treads were chosen for the building's exterior. These were placed upside down and layered up around the walls to create an unusual textured surface that moves when touched.

When the building is eventually disassembled, these elements will be sent to an Auckland-based tyre shredder so that they can eventually be donated to a local horse-riding school and used for the flooring of dressage arenas.

"Rubber chip is more comfortable for horses," said the designers. "Rather than simply recycling we increase value, contributing to community good."

The building has a narrow shape with a tapered tip. A doorway at the base leads inside where a seating area surrounds a small barbecue, while an opening at the peak of the roof functions as a chimney to allow smoke to escape.

Unlike the black rubber exterior, the inside of the tower has been painted bright red and features a redwood bark floor.

A ladder propped up against the wall allows occupants to climb up to a hidden window halfway up, allowing them to look out over the countryside surroundings, which include the neighbouring Brick Bay vineyard.

Angular red columns were also added on opposite sides to stabilise the structure.

"The folly is vague in its references," said the designers, comparing its form with furry animal pelts and traditional Māori clothing. They also describe it as a "prickly cousin" of an existing brick tower located nearby.

The tower was constructed off-site to ensure an easy installation. Five modular components were prefabricated before being trucked to the site and assembled with a crane. The structure will remain in place for 12 months.