Milan 2015: London designer Max Lamb presented 42 of his seat designs made using a wide variety of materials and processes within a disused garage in Milan last week (+ slideshow).

For his Exercises in Seating retrospective exhibition, Max Lamb arranged a variety of his chairs and stools in a circle that took up the full width of Spazio Sanremo in the city's 5vie design district.

The items were ordered roughly chronologically, starting from his first pieces created while studying at London's Royal College of Art (RCA) through to the most-recent products, which were designed specifically for the show.

Curated by design consultant Federica Sala, the exhibition took the title of Lamb's RCA thesis that he completed in 2006. 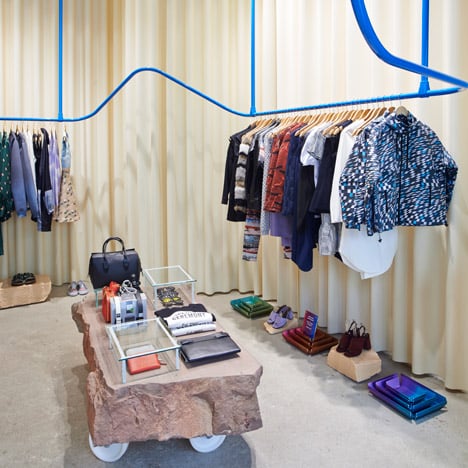 "Exercises in Seating is a living catalogue of the chair as an archetype of man and emblem of the conviviality denied at the act of creation," said Sala.

The designer's range of experiments with materials and their resulting forms was reiterated by showing the variety of pieces side by side.

"Each piece represents a different phase in the same obsessive search for the identity of the material, sometimes brutally sculpted, other times formally measured, released and recomposed," Sala said.

Lamb's early designs on show included the 2006 Pewter Stool, formed by pouring the liquid metal into a mould dug out from sand.

The creation of the Bronze Poly Chair, from the same year, involved hand-carving a polystyrene chair and then casting it in bronze.

The Delaware Bluestone Chair was carved from 120 kilograms of solid rock, while the Rusty Sheet Steel Chair was folded from a section of oxidised metal.

Moving around the circle, visitors also came across a spruce pine chair designed to be assembled by its user and a lounge seat with a frame made entirely from standard wooden dowels.

A chair Lamb created as part of an installation in Milan last year – in which walls, floor and furniture were all made from a speckled engineered marble – was also displayed.

"The ongoing investigation dedicated to the material, unable to find a point of arrival even after excellent formal results, gives life to a series of numerical variants or experimental variations on the same piece," said the curator.

Exercises in Seating was on show from 14 to 19 May at Via Zecca Vecchia 3 for Milan design week.