A team of Dutch companies has unveiled a proposal for a huge circular wind turbine that doubles as an apartment block and hotel, and also includes a rollercoaster.

Billed as "the most innovative windmill in the world", the Dutch Windwheel is intended as a landmark attraction for Rotterdam's waterside. Architecture studio Doepel Strijkers designed the structure and is promoting it with the help of partners Meyster's and BLOC.

The designers imagine the 174-metre-high structure as being framed by two rings – a rotating outer ring made up of 40 rollercoaster cabins, and a static inner ring containing flats, a hotel and a restaurant. 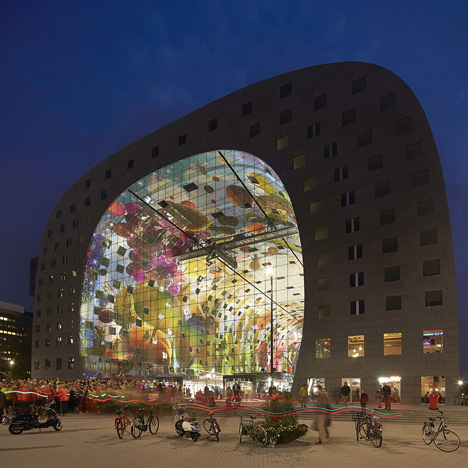 The wind turbine is at the centre but, according to the designers, it won't disturb residents or guests trying to sleep – because it won't make any noise.

Unlike traditional turbines that generate energy through the movement of wind-propelled sails, the Dutch Windwheel will require no mechanically moving parts, and will instead use a combination of wind and water to create electricity.

This technology is named EWICON, which stands for electrostatic wind energy convertor, and was developed by TU Delft researchers Johan Smit and Dhiradj Djairam.

It generates power using an electric field made up of thin metal tubes and nozzles that spray out water droplets.

The wind causes the droplets to move towards the positive electrodes, increasing their potential energy – the energy that an object has due to its position – and allowing it be harnessed.

The process is described by researchers as being "similar to pushing a rock up a mountain against gravity".  They believe it could function silently and without any vibrations.

"It is the first time the EWICON technique will be used in a building; it has only been tested in a laboratory," explained BLOC's Lennart Graaff. "The upscaling and optimisation of the technique will be part of the research and development path."

The team is currently in talks with the city council and a number of developers, technology and energy companies as well as universities to find ways of moving the project forward. But they believe it could be built as soon as 2020.

"The idea was born when we were discussing that Rotterdam is booming, but could really use an iconic attraction," said Graaff. "From the start we wanted to combine that with our ideas for a 100 per cent sustainable building, a platform for all kinds of technic and technologic innovations."

"We wanted to make a future landmark and a landmark for the future," he added. "The goal is to develop a building that generates more energy than it uses. We will use all the innovations that can contribute to that goal."

The building is expected to attract around 1.5 million visitors per year. As well as offering impressive views over the city, the rollercoaster will include an interactive cinema that charts the history of Dutch water management.

Part of the facade will integrate digital glazed "smart walls" that add a virtual layer in front of the view, helping users to identify various historic mills nearby.

The hotel will include 160 rooms across seven storeys, while floors below will accommodate 72 apartments.