Interview: every architect will soon design using 3D goggles, according to designer and visualiser Olivier Demangel, who believes that virtual architecture will be as convincing as the real thing within five years (+ movies).

Demangel, who works for London 3D imaging company IVR NATION, contacted Dezeen to show us a virtual reality model he'd created of a house featured on our website four years ago.

Built using photos and plans found online, Demangel claims the model of Ty Hedfan – a house in Wales designed by architects Featherstone Young – is 90 per cent realistic and demonstrates how VR will transform the way architects work.

"In the Ty Hedfan demo you can open the doors and turn on the lights," he said. "You can instantly change materials for the walls, the floor, the position of lights. Interactivity means you can experiment with a lot of different options — design, materials, lighting, weather — very quickly."

The designer created a series of walk-through movies of the house, which are shown here, but said you need to don an Oculus Rift 3D headset to really understand how convincing the virtual model is.

"It's hard to describe if you have never tried 3D goggles like Oculus Rift but it's really a full immersion," he said. "Your brain is completely tricked."

He added: "I asked some architect friends to test the Oculus Rift with Ty Hedfan and they couldn't describe how fantastic the experience was. They didn't expect it at all." 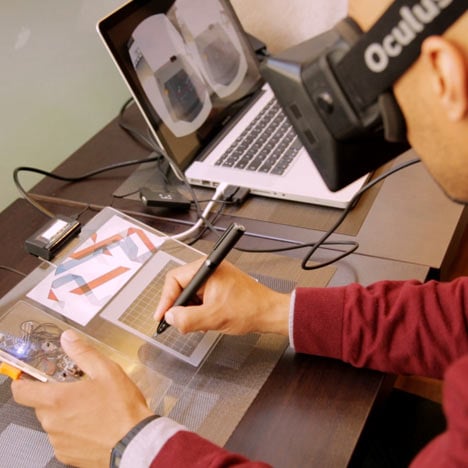 Demangel predicts that architects and designers will be designing using VR tools within a few years and sending clients virtual models of their projects so they can walk through them wearing a 3D headset.

"We could expect an empty room with positional tracking dedicated to VR in every architecture practice, for testing new designs," he added.

When asked whether virtual architecture would ever be more convincing than real architecture, Demangel replied: "There is no doubt in my mind about that. I used to say that when VR tech matures, it's going be more powerful than cocaine."

He added: "Probably the two main problems will be addiction and isolation. You are going to be able to experience The Matrix for real."

Read on for an edited transcript of our interview with Olivier Demangel:

Marcus Fairs: Tell us what you do.

Olivier Demangel: I studied industrial design and computer science. I worked in video games when I was in Paris and then for VFX and architecture practices in London.

Marcus Fairs: How did you get involved in virtual reality?

Olivier Demangel: The first time I had the chance to try a VR device was at the SIGGRAPH conference in New Orleans in 2009. It wasn't very good: the 3D goggles were heavy and the resolution was low. But I knew it was only a matter of time for VR.

After that I waited patiently until 2013, when Palmer Luckey created Oculus VR and then I bought the DK1 [the first version of virtual reality headset Oculus Rift] and then the DK2.

The first 3D model I decided to convert to VR was a concept train I designed for London Advanced Rapid Transit system (LARTs) in 2012. For the first time, I was able to see my design from every angle, like it was real. A screen can't compete with that because VR gives you a sense of scale.

Marcus Fairs: What are the advantages of VR over traditional design tools?

Olivier Demangel: The only thing that could compete with VR is a 1:1 scale model, which would be far more expensive, obviously. This applies to architecture as well. For example, with the Oculus Rift, you could detect flaws or issues in architecture that you couldn't see on plans.

The other thing provided by real-time 3D engine is interactivity. In the Ty Hedfan demo you can open the doors and turn on the lights. You can instantly change materials for the walls, the floor, the position of lights. Interactivity means you can experiment with a lot of different options — design, materials, lighting, weather — very quickly.

Marcus Fairs: How will VR change the way architects and designers work? And how quickly?

Olivier Demangel: It's hard to know, but I guess every architect will use 3D goggles when they design. Also, we could expect an empty room with positional tracking dedicated to VR in every architecture practice, for testing new designs.

Olivier Demangel: Personally, I will always use a pen for the first sketches to quickly bring my ideas alive. But probably the next generation of designers will use VR and new real-time 3D tools to design their ideas. Check out this software. It's a kind of Photoshop VR.

Marcus Fairs: How do you design for VR? What's the process?

Olivier Demangel: I start with a quick sketch on my graphic tablet and then I go to 3ds Max and do a basic modelling. Then I tweak my 3D model and try different options. Finally I export quickly with no textures to Unreal Engine and check out my design in Oculus Rift. I think Autodesk should soon provide VR drivers in order to see your model directly in your 3D modeller, though.

Marcus Fairs: How will VR become more immersive and convincing in future? What is beyond Oculus Rift?

Olivier Demangel: There are a lot of issues at the moment with the current VR devices, which are still prototypes. The field of view (FOV) is only 100 to 110 degrees, which prevents full immersion. The resolution of the screen is too low – about 3K at best for the HTC Vive – which provides a pixelated display and a "screen-door effect".

As well as this, the frames per second (FPS) has to be at least 75 and it's recommended to get 90 or even 120. The goal is to avoid the motion-sickness effect. The current graphic cards are not powerful enough to handle this level of FPS with a huge level of detail.

Plus you need a cable to connect your video card to the 3D goggles, except for some 3D goggles using a smartphone such as the Samsung Gear VR.

So in the near future, we should get very light and small 3D goggles like normal glasses, full FOV, wireless, 8K display and 120FPS for a full immersion.

The second technology to make VR more immersive is haptic technology. This is tactile feedback technology that recreates the sense of touch by applying forces, vibrations or motions to the user. Also, in the distant future, we could expect VR technology to be used in contact lenses.

Marcus Fairs: Tell us about the Ty Hedfan project. Why did you do it?

Olivier Demangel: I needed a proof of concept to show to architects. So I spent November and December 2014 doing the graphics and programming Ty Hedfan.

Marcus Fairs: Why did you choose that house?

Olivier Demangel: This is the type of architecture I like; I loved the design of this house. And it had everything I needed to show the potential of VR.

Marcus Fairs: How did you manage to model the building without visiting it?

Olivier Demangel: I first saw Ty Hedfan on your website. I use your website a lot, especially when I’m looking for a job! I grabbed everything I could about the house from the internet — plans, drawings and photos.

Marcus Fairs: How similar do you think your VR model is to the actual house?

Olivier Demangel: I would say about 90 percent. The last 10 percent is because I couldn't find any photos for some rooms inside the house. But the best would be to ask people who know this house to try the virtual model.

Marcus Fairs: What is it like to walk through the virtual house wearing Oculus Rift?

Olivier Demangel: It's hard to describe if you have never tried 3D goggles like Oculus Rift but it's really a full immersion. Your brain is completely tricked. I asked some architect friends to test the Oculus Rift with Ty Hedfan and they couldn't describe how fantastic the experience was. They didn't expect it at all.

Marcus Fairs: Will there come a time when VR architecture is as convincing as physical architecture?

So in four to five years you will have the new generation of 3D goggles with full FOV, an 8K display and haptic technology so you will be able to touch virtually every object in your virtual room.

Marcus Fairs: What other developments, in VR or other tech, do you expect to see in the future?

Marcus Fairs: How will these developments change the way architects and designers work?

Olivier Demangel: For the software, when real-time global illumination matures, the current workflow in architecture - 3ds Max/V-Ray - will be replaced by 3ds Max/real-time rendering. It's going to be cheaper for the architecture practices, as you won't have to wait anymore for rendering images or animation.

Marcus Fairs: How will these developments change the way people experience architecture and design?

Olivier Demangel: Some examples: estate agents are going to use 3D goggles. There will be no need to physically visit the house. Also, architects will be able to send files to clients and they will be able to take a virtual walkaround. Or perhaps you could have an empty room in your future house dedicated to VR? You could choose a different interior every day, like the Star Trek holodeck.

Olivier Demangel: I think VR is like television 60 years ago or the internet 20 years ago — it's a technological breakthrough. It's going to change a lot of things in entertainment including movies, TV, sports and video games, as well as advertising and marketing, industrial design and architecture, medicine, social networks…

Marcus Fairs: Will the virtual world become more compelling than the real world? If so, what issues will this raise?

Olivier Demangel: There is no doubt in my mind about that. I used to say that when VR tech matures, it's going be more powerful than cocaine. Probably the two main problems will be addiction and isolation. You are going to be able to experience The Matrix for real.