This small hair salon in Osaka features a series of ceiling hooks that allow the owner to rearrange the mirrors and shelves that help define the space (+ slideshow).

Called Re-Edit, the 57-square-metre salon was designed by Sohei Arao, co-founder of Japanese studio Sides Core, for an old friend who wanted to start his own business.

After a long hunt for a suitable venue, the designer and client found an old shop on a corner plot in the city of Sakai, in Japan's Osaka prefecture.

"He wanted a space where people go to get a haircut and leave with their hearts and minds feeling refreshed," explained Arao.

The idea of bringing new life to an existing space became the focus for the design, which offers the owner the possibility of re-arranging the main consultation and cutting area at the front of the store using a system of hooks and cables.

"The name Re-Edit is about editing something that already exists to bring out and preserve inherent value," said Arao. 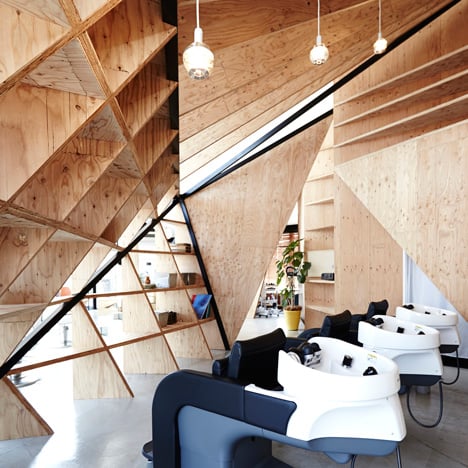 "To make it possible for the owner to freely edit the layout, we hung the mirrors and shelves from a ceiling grid with hooks and ropes rather than attaching them to walls."

Clients enter through a door on the right-hand side of the facade, where a simple rectangular structure made from plywood provides a reception desk.

The same material was used to create a shelf, which is hinged to the wall and folds out to create a flat surface, with support provided by clamps connected to cables that are hung from the ceiling.

Yellow metal discs with loops for attaching the cables are arranged in a grid of 13 across the ceiling.

The ceiling hooks are also used to suspend a series of different lights as well as the three large arched mirrors that define each of the cutting stations in the main room.

At the back of the space, a partition with large windows that reflects the design of the existing facade creates a more private space for washing hair, with two basins and reclining chairs.

"We kept the existing facade and painted it grey to reflect the new tenant," said Arao. "The interior duplicates this facade, blurring the boundary between the inside and outside."

"Two sides of this corner property are left open while the thinnest of curtains cover the windows, limiting the view from outside," he explained. "The curtains diffuse the natural light that fills the salon into a pleasant glow requiring no artificial lighting during the day."

A toilet is also tucked into a space inside the washing area, which features a similar shelving system to the main cutting space but with red wall hooks instead of the yellow ceiling hooks.

A small separate room behind a plain white door to the left provides storage space for products and mixing hair colours.

The sign for the shop is a piece of plywood cut into an arched shape to mimic the mirrors inside and is hung from a matching cable. Arao also designed the business cards, which feature the same shape.