Sections of wall appear to hang from the ceiling of this former warehouse club in Tokyo, which was converted into offices by local studio Sasaki Architecture (+ slideshow).

Slices of glazing inserted between the base of the thick walls and the concrete floor are designed to make the partitions look like they are levitating, while allowing natural light to filter into the centre of the plan.

Wall Cloud was devised by Sasaki Architecture for a former waterfront warehouse in the Minato district of Tokyo that operated as a popular disco called Juliana's Tokyo in the early 1990s.

While the lower floors were successfully converted once the club was shut down, the low ceiling in the attic proved more off-putting for developers.

"The attic part of the former discotheque on the second floor remained untouched for a long time, since it had a low ceiling height, causing an oppressive feeling in the space," said the architects.

The space was two metres tall at its highest point but just 1.7 meters – about the height of the average person – where the ceiling dipped down under a network of chunky beams.

To increase the height, the designers removed the existing false ceiling and added sections of wall under the beams to segment the space into individual offices.

Slices of glass span the gap between the base of the walls and floor, allowing light to penetrate the plan and providing office workers with glimpses into adjoining spaces.

"Our design intended to create an open space with floating walls and pillars," said the architects.  "The beams and other components were reconsidered as different spatial components, and were redefined in the space." 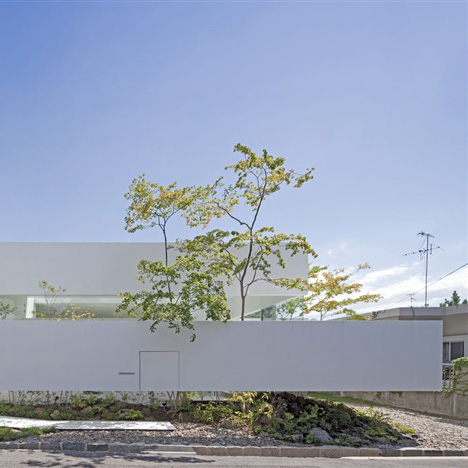 Horizontal panels set between walls provide concealed desks and shelving, while the legs of free-standing furniture and employees can be seen from neighbouring spaces.

The exposed concrete floor, which is yellowed and scuffed with age, is coated in clear varnish, while the plasterboard walls are painted in a contrasting bright matt white.

Strip lighting set into the white ceiling and beams above openings in the wall highlights the interventions and is designed to "enhance the sense of floating".