The London studio, headed up by Kate Davies and Liam Young, collaborated with ceramicist Kevin Callaghan to form the three radioactive vases from the toxic waste generated during the production of electronic devices like smartphones and laptops.

"The vases are a way to talk about ideas around luxury and desire," Davies told Dezeen. "These three 'rare earthenware' vessels are the physical embodiment of a contemporary global supply network that displaces earth and weaves matter across the planet."

Along with photographer Toby Smith, the team tracked and documented the supply chain of everyday electronic gadgets and the rare earth materials used in their production, and followed it backward.

"Rare earth minerals are some of the fundamental ingredients in contemporary electronics," said Young. "For example, a smartphone has eight different rare earths in it. Everything from the material used in its memory to the red-coloured pixels of its screen and the polish used on its glass."

Their investigation took them to Baotou – an industrial city on the edge of the Gobi Desert in northern China – where they found an "ocean of black mud" pumped out from a refinery that processes the metals, which are sourced from nearby mines.

"Vast areas of the world have been remade in the service of our shining gleaming digital futures and our toxic vases are an attempt to make these hidden relationships more visible," Young told Dezeen. "Our tech gadgets are sold to us through qualities like lightness and thinness and terms like 'the cloud', or 'Macbook Air', but in fact they are actually geological artefacts." 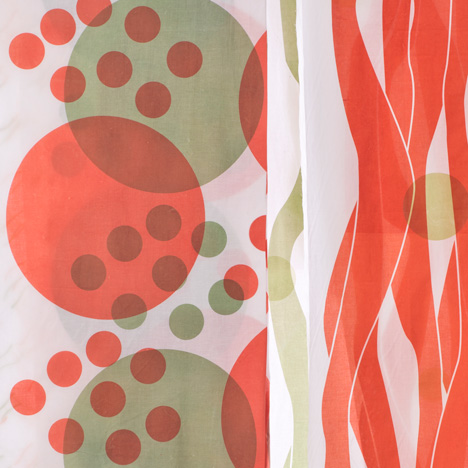 The team collected samples of the mud, which showed three times the normal level of background radiation when tested, and brought them back to London to produce the vases.

By studying the manufacturing process, the amount of waste created in the production of a smartphone, laptop and electric car battery was calculated and then used to form the three vases.

A binding agent was added to the material to give it the right consistency to be able to turn on a pottery wheel. The sheen of the surfaces is a result of the metal content in the mud.

"Because the heavy metals content of the lake mud is so incredibly high, when it is fired in a pottery kiln those metals melt and create their own glistening glaze on the surface of the vase," said Young.

The vases are shaped so their silhouettes resemble Chinese Ming dynasty porcelain Tongping vases, as a reference to changing ideas of luxury.

"Ming vases are particularly iconic objects of high value as well as being artefacts of international trade," said Davies.

The three vases and the film produced by Smith that documents the project are on display at the What is Luxury? exhibition at London's V&A Museum until 27 September.

Everyone that came into contact with the radioactive material, from sourcing to installation, had to wear protective gear at all times.

"At every stage of the process everyone would wear dust masks, gloves, goggles and protective suits when handling the material and any waste has been disposed of via hazardous material routes," said Young.

"An entire city is built beside this toxic lake in Inner Mongolia yet for us to be safe when handling this material and get past the museum's health and safety team we all needed full body protection," Young said.

Unknown Fields Division is also making a series of protective cases to house the vases after the exhibition ends.

"Once they have left the Victoria and Albert Museum exhibition we like the idea that the vase might sit in the home next to someone's smartphone, the latest gadget sitting next to its shadow," said Young. "It is interesting to have this danger ever-present in our lives. If we choose to live with the technology then we must be ready to live with its consequences."

Movie is by Unknown Fields and Toby Smith.