Milan Expo 2015: Daniel Libeskind has completed his dragon-inspired pavilion at the Milan Expo, which features a sinuous body and a scaly red and gold skin (+ slideshow).

The Vanke Pavilion, for China's largest property developer, is a spiralling structure with staircases wrapping around its perimeter and a "forest of bamboo" contained inside.

Speaking to Dezeen at the launch event earlier today, Libeskind described the reptilian structure as a "handcrafted dragon". Its exterior is clad with approximately 4,000 shimmering ceramic tiles that look like scales.

These tiles feature a metallic surface, so they appear to change colour from red and pink to gold and white.

"I started this project thinking about Chinese landscape," explained the architect. "I have a big collection of books on Chinese landscape art, which has these incredible mountains and formations. But when I finished the project everybody saw this dragon."

"Then I discovered that the symbol of the dragon is underlining the mountain," he said. "The dragons are the living earth, and that seemed appropriate."

Libeskind said he is using the same cladding for a housing project in Berlin, so the pavilion provided a great opportunity to experiment with the material. 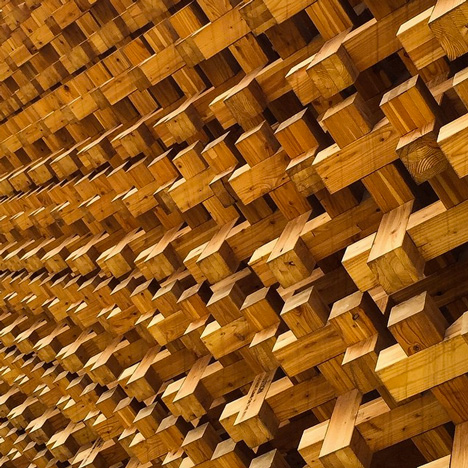 Milan Expo 2015 opens to the public

Each tile is fixed to a steel supporting structure, and none of them appear to touch. Because of this, shadows form underneath each one.

"If you look at the form of the pavilion, it's really to be seen in the round," said Libeskind.

"I wanted it to be interesting from different perspectives, whether you come from one entrance or another, or whether you just stumble upon it. It will always change in light."

Two grey concrete staircases are slotted in behind the cladding – one forms the entrance and the other functions as the exit route. They wind up from the ground floor towards the two upper storeys and up to a terrace on the roof.

At the entrance, the staircase also widens to provide an informal seating area.

Libeskind said he developed this form entirely through traditional drawing and modelling, instead of using the parametric modelling systems favoured by architects including Zaha Hadid.

"I've never used a computer to develop a form," he claimed. "I think the difference between this and parametric form is that this is not an aerodynamic form. It's really a handcrafted dragon."

The pavilion's exhibition, designed by Ralph Appelbaum Associates, is located on the ground and first floors. Made up of approximately 200 bamboo screens, it surrounds a reflective pool of water.

An events space and VIP room occupies the second floor and is furnished with several Libeskind designs, including a glass chandelier and an angular shelving unit.

Libeskind previously said that he would not work in China on ethical grounds and urged architects to "think twice" about building in the country. But the architect claimed that Vanke is a company with a social agenda, so he was happy to partner with it.

"It has an idea of community and how to create a better society in China, and those are not easy circumstances," he said.

The Milan Expo opened to the public today. Despite suggestions that the site wouldn't be ready in time, most of the pavilions appeared to have been finished.

But the event has proved controversial, with protesters setting fire to cars and plastering the city in anti-expo graffiti.

More from the Milan Expo