Visitors are invited to clamber up over the expansive temporary landscape, which gently flexes under the weight of footsteps. As they ascend, they are able to look down through the gaps onto an assortment of South American plant varieties.

"We tried to work with the idea of a plaza," explained Raphael França, a member of the Studio Arthur Casas team. "We wanted to have a non-building somehow, by cherishing the idea of a very ethereal pavilion."

The pavilion, which is one of the largest built structures on the Expo site, comprises two adjoining blocks – one housing the main exhibition and the other conceived as a Brazilian garden and playground.

The garden is framed by a structure of Corten steel, intended as a pergola. The pre-weathered metal gives the space an orange hue, visible on both the I-beams and the perforated cladding panels.

The rope canopy is strung up around the structural columns and held in place by metal fixings, creating a flexible surface that spans the length of the space.

"It's a reminder of our soil back home – fertile, filled with iron," França told Dezeen. "We wanted to inspire sensations of Brazil, not to impose it or fall under any kind of cliché."

"Under the canopy there are Brazilian plants, some native, others that have found a particularly adaptable climate in our country," he said. 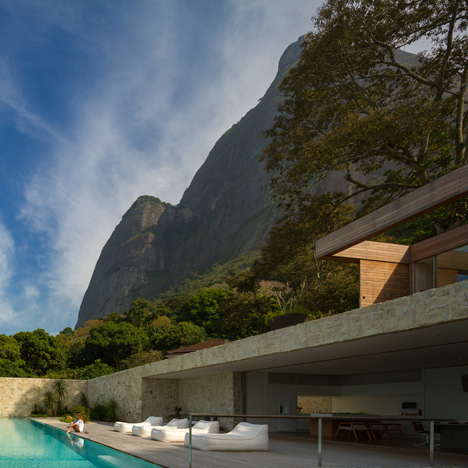 "You play, but at the same time you see that this canopy takes you to other spaces, to the galleries or to this nice garden underneath your feet."

A limited number of visitors are allowed on at once and, for safety, a net is suspended directly underneath. Bouncing is strictly banned, and users are encouraged to help each other across.

The concept stemmed from the idea of a network, which is central to the pavilion's design. Responding to the central Expo theme, which is Feeding the Planet, Energy for Life, the team – led by architects Alexandra Kayat and Gabriel Ranieri – wanted to explore elements they feel are important to Brazil's food production industries.

"The main concept is how to present Brazil to the world and its vital role in food production by a fusion of architecture, exhibition and experience."

"The canopy is a literal translation of the idea of network," he added. "It's playful of course, but it works as an installation where people from everywhere play together, discover the otherness of strangers, and share the same astonishment and joy."

In addition to the rope canopy, ramps and staircases were installed along the edges of the structure, offering a route down. They also provide access to the second structure, which contains a restaurant and the more formal exhibition area.

Brazil is one of 145 nations participating in the Milan Expo 2015. Despite fear thats many pavilions wouldn't be complete in time for the event opening last week, the structure was almost entirely ready on schedule, bar a few items caught up in customs.

"Minor details are always there to be corrected, but overall, it's ready," said França. "This was a very tight budget compared to other pavilions, we had meagre means and big aspirations!"

Photography is by França.