A plot left unused for decades because of its awkward triangular shape is now the home of this concrete cafe designed by South Korean office Studio GAON (+ slideshow).

The form of the two-storey building, named Extrude, was dictated by the shape of the site – a parcel of land that sits on the edge of the Han River in South Korea's Gyeonggi Province.

The site had once been larger, but was significantly reduced in size when the highway that runs along the edge of the river was widened. Studio GAON described the leftover land as being like "a last piece of pizza".

"When the road along the river was widened, it made this land end in a weird shape," explained architects Hyoungnam Lim and Eunjoo Roh, whose previous projects include the conversion of a 20-year old factory into a house.

"Because of the form, the land remained empty until we intervened," they said. "When we visited the site with the clients, it felt as if the land beckoned us to make use of it."

The building occupies the majority of the plot and its walls run mostly parallel with the perimeter boundary. However, because of the proximity to the dual carriageway, the corners are curved rather than pointed to make them less dangerous in the event of a traffic accident.

Concrete was chosen for the building's primary structure and left exposed on the exterior walls. 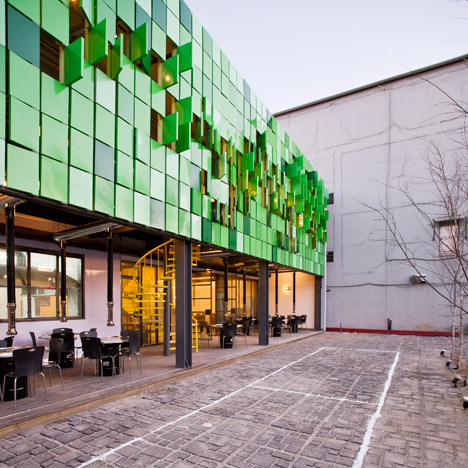 The addition of windows presented a puzzle – the architects were used to responding to context when designing glazed elements. Here, they were given free rein.

"To build on an erased context seemed unnatural, comparable to drawing a mouth, nose, and eyes on a shapeless mass," explained the pair.

Their approach was to use a variety of window styles for different purposes. Long strips of glazing provide panoramic views out towards the river, while smaller square windows offer a solution when privacy is an issue.

A section of curved low-level glazing was also installed at the western corner to reveal the staircase inside. "We opened the west edge like a fish opening its mouth," said the architects.

A pathway cuts through the building at ground level, dividing the floor plan up into two sections and creating a sheltered entranceway. One side functions as the main cafe area, while the other side forms the stairwell.

The dining area on the upper level boasts high ceilings, intended to make it feel spacious. Pendant lights hang down from the exposed concrete ceiling and there is also a series of circular skylights.

Walls are lined with timber slats that help to improve the acoustics. According to the architects, the aim was to "enhance a gentle atmosphere".