Dezeen has won Commercial Campaign of the Year at the British Media Awards 2015 for our Dezeen and MINI Frontiers collaboration, beating publishers including News UK, Trinity Mirror and Time Inc.

Dezeen's founder Marcus Fairs, head of studio Ben Hobson and head of video Oliver Manzi collected the gold award for first place in the category at the awards ceremony in London last night.

The awards, where Dezeen was also shortlisted in the Website of the Year category, were hosted by newsreader Natasha Kaplinsky.

"Dezeen managed to execute a huge campaign," the British Media Awards judges said. "The campaign's editorial video was picked up by other media outlets earning even greater PR."

Dezeen and MINI Frontiers, our ongoing collaboration with MINI exploring how design and technology are coming together to shape the future, beat a shortlist featuring much larger publishers including News UK, Trinity Mirror and Time Inc. 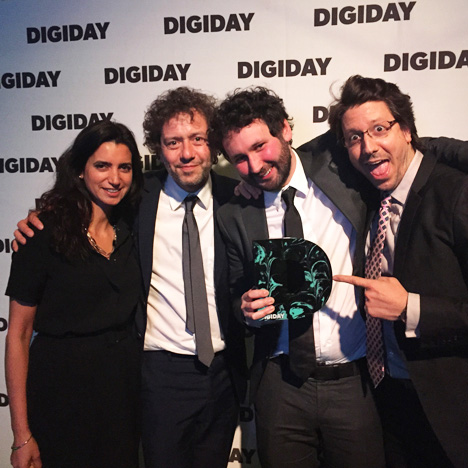 Other big winners on the night included Vice, the Financial Times and the Guardian, which picked up three awards, including beating Dezeen to Website of the Year. Dame Marjorie Scardino was honoured for her Outstanding Contribution to British Media as CEO of publishing giant Pearson. See all the winners here.

This is the third award in quick succession for Dezeen, with other accolades this year including Best Content Studio at the Digiday Publishing Awards 2015 as well as a Webby People's Voice award for technology video of the year.