The new products include Brooklyn-based Karl Zahn's Bounce, which comprises a small, adjustable light source that reflects light off the folded circular aluminium shade above.

The shade is attached to a single point on the ceiling by a fine chain. The light can be placed on the floor, a table, or mounted to a wall.

Also by Zahn, Cora is made from a series of square aluminium columns with one edge rounded off to reveal the light inside.

The pendant is named after the daughter of Greek deities Zeus and Demeter. According to myth, Cora is condemned to return to the underworld every year, taking light and warmth from earth with her.

Shape Up by New York's Ladies & Gentlemen Studio is a collection of pendant lights made from mouth-blown glass, spun steel, aluminium and brass. The pendants hang from cords that are threaded through a series of pulleys and weights, enabling flexible positioning and a variety of possible shapes.

"These playful collages upend traditional notions of symmetry in favour of a dynamic spatial harmony," said a statement from the brand. "The collection's abstracted shades are networked via connecting cords and hubs. The resulting modular system allows the shapes to be suspended and composed in response to a space's architecture and function." 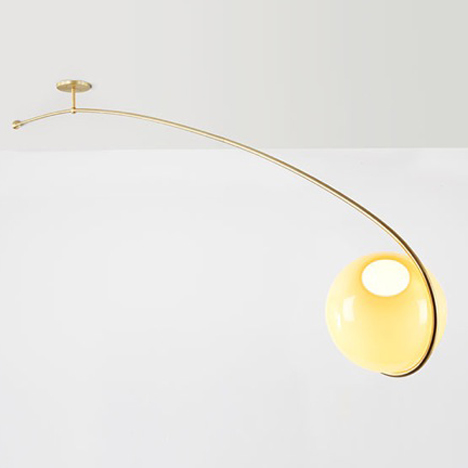 Jason Miller's Castle was inspired by the game of chess. The glass tubes extend from the centre of the pendant to different lengths, but only ever horizontally or vertically, in the same way the rook or castle can only move orthogonally in the popular board game.

Mini Farrago, also by Miller, features a series of steel and acrylic cylinders, some illuminated, others not, that cross a central point in multiple directions. Conceived as an architectural element as well as a lighting fixture, Mini Farrago was inspired by wooden ship's masts.

London-based Philippe Malouin's Eclipse sconce light features a semi-spherical steel shade that attaches to the wall, creating a halo effect around its edge as the light inside escapes.

Finally, Astral Agnes by New York designer Lindsey Adelman features a collection of illuminated glass cylinders resembling majorette batons, with an aluminium section in the centre where they are connected to the light.

New versions of the brand's existing lines – including Halo, Gridlock, Seed, Knotty Bubbles and Modo – will also be on display at showrooms The Future Perfect and DDC during NYCxDesign, which kicked off last week and continues until 19 May.