Milan 2015: Dutch design studio Droog has launched a collection of small hardware items to focus on the functional elements of furniture design that are often overlooked.

The Construct Me! collection includes nails designed to reduce the risk of hitting your thumb with the hammer, two-way tie wraps, "fancy hinges" and screws with smiley faces on the heads.

"Our screws, hinges, nuts, nails, brackets and other hardware are super-functional - in some cases we have even extended their function - but they also add value, character and a richer narrative," said the studio. "They give flavour to simple DIY work, revive existing furniture and challenge the designer."

Droog's intention was to highlight the small yet essential components needed to build items of furniture.

"Hardware pieces are beautifully engineered, but often hidden," Droog's Henry Roberts told Dezeen. "We wanted to celebrate those pieces by giving them a new character through function and aesthetic." 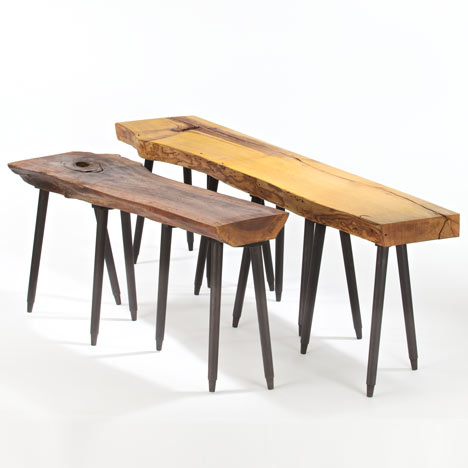 Founded in 1993, the studio created its smallest exhibition to date at a hardware shop on Via Panfilo Castaldi in Milan to showcase the tiny designs.

The items were presented in a large tray at the centre of the space and visitors could purchase the screws from a gumball vending machine outside.

"Manufacturing at this scale required a highly technical input, we had to think creatively to use what little space we had to give our hardware a poetic twist while still retaining its specific function," said Roberts.

The exhibition won the Best Tech category in the fifth edition of the Milano Design Award, which honours the best presentations during the city's annual design festival.

"Commended for the originality in the choice to work on the 'micro' dimension, which becomes added value without the need for spectacular effects, the project discreetly shows simple technology infused into design, through experimental and innovative products, highly technical, yet poetic," said a statement from the awards organisers.