Israeli artist Tsibi Geva has wrapped his country's Venice pavilion in old car tyres and filled it with a mixture of found architectural and household objects to explore ideas about the home (+ slideshow).

Called Archaeology of the Present, Geva's site-specific installation for the Venice Art Biennale 2015 includes walls covered in window shutters and a large-scale work consisting of found household objects, which are packed into a corner behind glass walls.

The pavilion's exterior is covered in a grid of over 1,000 used car tyres imported from Israel and tied together to create a protective layer that covers the walls of the structure, including the windows, leaving only the entrance exposed. 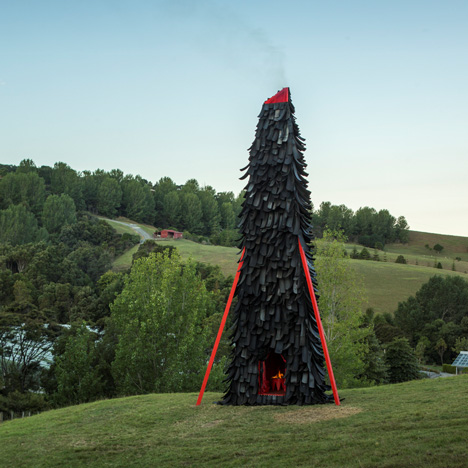 "The used tires, which are impregnated with a distinct odour, form an organised network of holes imbued with a protective potential, while simultaneously attesting to a state of danger, constituting a powerful material presence, and communicating a charged, urgent visual and political statement," said the pavilion organisers in a statement.

"Upon entering the pavilion, the exterior installation is visible once again from the inside, together with an interior installation including paintings, sculptural elements, and found objects, abolishing hierarchical distinctions between artistic mediums and structures," they added.

Located in the Giardini – the gardens in the east of the Italian city that have hosted the biennale since 1895 – the pavilion was originally designed by architect Zeev Rechter and is unusual for having three floors.

On the upper levels, Geva has installed large-scale paintings and further found-object sculptures, which feature a range of artefacts contained inside metal cages with a triangular profile.

Each of these features a different pattern in the metalwork lattice, with some emulating brickwork and others appearing more abstract.

"Archeology of the Present gives expression to Geva's ongoing concern with elements related to the notion of "home" – including terrazzo tiles, windows, shutters, lattices, and cement blocks; elements which exist as fragments of what once was, or could in principle constitute, a home, yet not as the vestiges of an actual, concrete house," said the organisers.

This year's biennale is curated by Nigerian art critic and writer Okwui Enwezor, with the theme All the World's Futures.

According to the statement issued by the organisers, Geva's installation "may also be read with regard to the current state of humanity and the world".

"His long-term engagement with the stratified structure of identity, and Archeology of the Present in particular, offer an opportunity to explore this notion within the wider narrative of nationality as proposed by la Biennale di Venezia," they said.

The brickwork pattern of the cages reappears in some of the paintings, suggesting a political element relating to boundaries and walls that is made more explicit in a piece called Gazzza – one of the only pieces in the installation that was created prior to the biennale.

As the pavilion's existing signage has been covered by its new tyre facade, the word Israel has been written directly onto the structure by the entrance like a graffiti slogan.

"Geva's work is based on different types of obstructions, which always contain gaps and holes through which the gaze can penetrate, but the body cannot pass," said the pavilion's curator, Hadas Maor.

"The layout of the project within the pavilion creates sharp transitions between experiences of blockage, discomfort, and spatial ambiguity and between intimate, poetic moments, so that fragility and crudeness, lyricism and violence, are inextricably intertwined," she added.

The 56th edition of the Venice Art Biennale opened on 9 May and runs until 22 November.

At last year's Architecture Biennale, which occurs on alternate years with the art event, the Israeli pavilion featured "sand printers" that mapped out developments planned in the country since 1949.