Zaha Hadid Architects has unveiled plans to build a high-density housing development in Monterrey, Mexico, despite having been asked to design a series of high-rise towers (+ movie).

For its first project in Mexico, the London firm will redevelop a site between an eight-lane motorway and a residential neighbourhood to create a community of wave-shaped apartment blocks, accompanied by a 30,000-square-metre public park.

The brief originally called for 12 homogenous towers, but the architects felt it would be more appropriate to propose "an alternative community-orientated design".

The result is a series of nine-storey-high slab blocks designed to curve back and forth around the edges of the rectangular site, framing gardens along the edges and an expansive park at the centre.

"By gradually fragmenting the overall volume of the design, its relationship with its context is customised to become solid in some areas and permeable in others," explained Zaha Hadid Architects, which also now has a project in Brazil. 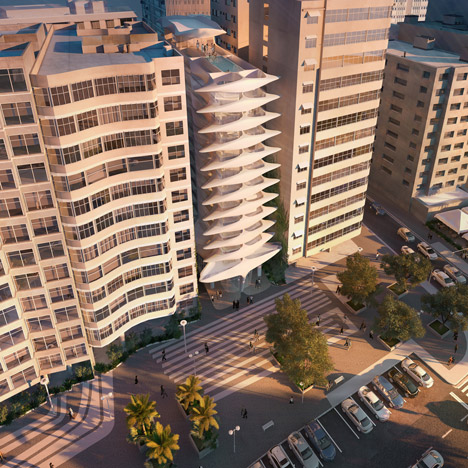 "This transition from solid to porous reflects the extreme contrasts which characterise the surrounding urban fabric: from the noisy commercial side with its eight-lane motorway; to the quiet, low-density suburban developments that spread to the base of the mountains in the distance," said the firm.

Named Esfera City Center, the complex will accommodate 981 apartments, varying in size between 45 and 165 square metres. These will include some three- and four-bedroom homes that should prove more attractive to families.

Externally, the proposed buildings draw inspiration from the local architectural heritage. According to Zaha Hadid Architects, the Mexican tradition of interlocking lattice geometries will be reinterpreted to provide sunshades.

"These lattice geometries have been used widely throughout pre-Columbian, colonial and contemporary Mexican architecture to give protection from the sun and generate varied and dynamic displays of light and shadow," said the firm.

The orientation of each building has also been planned according to the movement of the sun, as well as to screen residents from harsh winds.

Responding to the location in Huajuco Canyon – a valley between two mountain ranges that has its own subtropical microclimate – generous balconies will be created, featuring gardens, barbecue areas and swimming pools.

Bridges will connect the buildings with the large park, which will include a chapel, a treehouse, sandpits, an amphitheatre and a picnic area.

The project will be constructed in three phases, with the first expected to complete in 2018.