Dezeen promotion: designers and architects including Nicholas Grimshaw, Michael Young and Tomas Alonso will take part in talks and discussions during this year's Clerkenwell Design Week from 19 to 21 May (+ slideshow).

Held on the third floor of the Farmiloe Building, Conversations at Clerkenwell will begin on Tuesday 19 May and will run for the duration of the three-day design event.

Ben Van Berkel of UN Studio and Mark Davy, founder of cultural and arts strategy company Futurecity, will kick off the programme. Based on new research commissioned by Canaletto and collated by Cambridge professor Dr Brendan Burchell, the pair will discuss the effect design can have on well-being.

Following on from their recent seating installation at Chatsworth House, Raw Edges will be joined by Hannah Obee, curator of exhibitions at the stately home. Together, they will explore the emerging trend of contemporary designers exhibiting work within a historical setting.

British designer Terence Woodgate, Carlotta De Bevilacqua of lighting brand Artemide and Keith Bradshaw of illumination specialists Speirs + Major will host a talk based on how different lighting affects our perception of space. 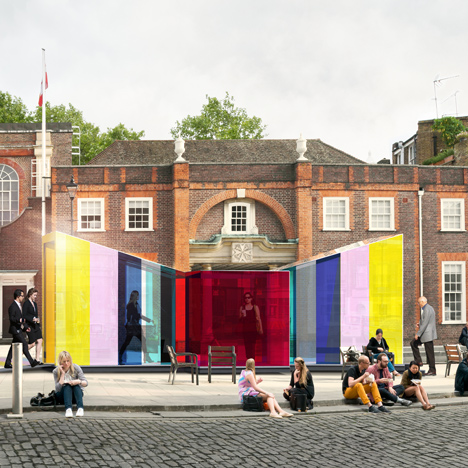 The Design Guild Mark will end Tuesday's sessions, posing the question: Is there still such a thing as British design? Jeremy Myerson of the RCA will chair the discussion, alongside a panel including British designer Sebastian Conran, Barbara Chandler of The Evening Standard and John Lewis' head furniture buyer Jason Wilary-Attew.

Making up the panel are head of Italian furniture brand Moroso, Patrizia Moroso, and London-based designer Nipa Doshi, who will provide their opinions on the importance of originality in a world dominated by passive consumerism.

Coinciding with their current exhibition at the Design Museum, show brand Camper is hosting a talk with two of their collaborative designers, Nipa Doshi and Tomas Alonso.

Joined by the museum's head of exhibitions Nina Due, the pair will discuss their experiences with Camper, and how it differs from working with other brands.

Mark Eley of Eley Kishimoto, Bethan Gray, Morag Myerscough and Stephanie Macdonald of 6A Architects are among the designers that will join design journalist Katie Treggiden to discuss the crossover between fashion, design and architecture.

Michael Young and Todd Bracher will be talking to deputy director of the London Design Festival, Christopher Turner, about the global importance of the London design scene.

Hugh Pearman, architecture critic at the Sunday Times and editor of RIBA J, will discuss Brutalist architecture with a panel of experts.

The programme concludes with a talk chaired by Peter Murray of New London Architecture. Entitled Reclaim the Street: Designing the Urban Commons, four practitioners will present their approach to public realm design.

Conversations at Clerkenwell runs throughout the London area's annual design festival, taking place from 19 to 21 May this year.

Read on for the complete list of talks and more information from the organisers:

Kicking off the programme will be Ben Van Berkel of award winning international architecture practice, UN Studio, together with Mark Davy, founder of cultural broking and arts strategy firm, Futurecity. Van Berkel and Davy will look at how design can affect well-being based on a new research - commissioned by Canaletto - from Dr Brendan Burchell, Professor of Sociology at Cambridge University. Following this, Monotype and a panel of graphic design experts explore how graphic design works in public spaces- names include Jonathan Barnbrook, Sarah Hyndman and Tony Brook.

In the afternoon a talk entitled Modern Furniture in Heritage Settings will see UK-based, Israeli born designers Raw Edges discuss the emerging phenomenon of putting contemporary designs into historic settings with Fredrikson Stallard and Hannah Obee, Curator of Exhibitions and Special Projects at Chatsworth. This talk is chaired by Suzanne Trocmé of Wallpaper*.

Later that afternoon, lighting experts Carlotta De Bevilacqua of Artemide, British designer Terence Woodgate and Keith Bradshaw of Speirs + Major will discuss how interior, exterior and sculptural lighting affects the way we perceive spaces. This talk is followed by an open discussion, led by Sir Nicholas Grimshaw, which looks at his architecture practice's previous industrial designs and collaborations. Grimshaw will be joined by his Head of Industrial Design Cas Zdanius, Kurt Wallner of Poltrona Frau & Cassina and product designer Theo Williams.

Tuesday ends with The Design Guild Mark asking Is there still such a thing as British Design?. The discussion will be chaired by Jeremy Myerson with a panel including Barbara Chandler of The Evening Standard, designer Sebastian Conran, and Jason Wilary-Attew, Head Buyer of Furniture at John Lewis.

Wednesday 20 May starts with its headline talk #BeOriginal, where Elle Decoration's Editor-in-Chief Michelle Ogundehin will chair a panel with some of the leading women in today's design industry, including Patrizia Moroso, Nipa Doshi and Pip Prinsloo, Design Director at John Lewis. The group will discuss the importance of originality and independent creative thought in our world of increasingly passive consumerism.

Another key talk of the day is one hosted by fashion brand Camper which is to coincide with its new show at the Design Museum. Esteemed Camper's designers Nipa Doshi and Tomas Alonso will join the musuem's Head of Exhibitions Nina Due to discuss their unique work with Camper, as well as culture, commerce and commissioning.

Exploring the blurring boundaries between fashion, design and architecture, Mark Eley of Eley Kishimoto, Bethan Gray, Morag Myerscough and Stephanie Macdonald of 6A Architects will be in conversation with design journalist Katie Treggiden.

Next on the schedule is Moving with the Tides: The Thames as London's future public space chaired by Sarah Gaventa, founder of Made Public. As London grows upwards and outwards, our public spaces are feeling the squeeze and the river has become a natural draw. Farrells, David Kohn Architects and Studio Octopi will discuss their proposals for ways to turn the Thames into the focus of public activity in London once again.

The final day of the festival starts with founder of Futurecity Mark Davy discussing the pros and cons of working on large infrastructure art projects with guests and fellow collaborators.

Following this Christopher Turner, deputy director of the London Design Festival talks to designers Michael Young and Todd Bracher about the importance of the London design scene in a global context. Formally based in the UK, both Young and Bracher chose to move their practices to Hong Kong and New York respectively.

In the afternoon, Brutalism: Save it or Scrap it? sees Hugh Pearman, Architecture Critic at the Sunday Times and editor of RIBA J discuss the heritage of this controversial style of architecture with a panel of experts. Archiboo returns to the festival with The Architects Pitch, inviting architects to test their communication skills in front of industry experts and a live audience.

The final talk of Conversations at Clerkenwell, Reclaim the street: designing the urban commons brings together four practitioners who will present their approaches to public realm design, drawing on examples within and beyond London. The talk will focus on the increasingly politicised sphere of public space and the indisputable value that it brings to its citizens.

Talks at Icon's House of Culture

In addition to Conversations at Clerkenwell at Design Factory (The Farmiloe Building), the festival's new venue, Icon's House of Culture at The Old Sessions House, will host a series of talks featuring Michael Young, Gam Fratesi, Ooze Architects and We Made That.

During Clerkenwell Design Week, a range of exciting new talks will also take place in leading design showrooms across Clerkenwell.

On Tuesday 19 May, Benjamin Pardo, Vice President of Knoll will be in conversation with designers Edward Barber and Jay Osgerby, while founder of Dezeen Marcus Fairs will join Patrizia Moroso and David Adjaye to explore the architect's new furniture collection for Moroso, 'Double Zero'.

On the same night, Vitra has invited Johanna Agerman Ross of Disegno to lead a panel discussion between Eckart Maise, Chief Design Officer at Vitra and Shubhankar Ray, Brand Director at G-Star RAW, to coincide with the UK launch of the Prouvé RAW Office Edition.