Zaha Hadid has completed a new facility for the University of Oxford – a centre for studying Middle Eastern culture, conceived by the architect as a reflective tunnel suspended in space (+ slideshow).

The Investcorp Building expands the Middle East Centre at St Antony's College – one of the seven graduate colleges that comprise the UK's oldest university – providing a new lecture theatre, library and archive.

Zaha Hadid designed the building to look contemporary but to also match the scale and massing of existing buildings on the historic campus, from the Victorian-era convent and library, to the 1970s Brutalist-style Hilda Besse building.

This resulted in a smooth curving form that gradually changes in height, and also turns to avoid the trunk and roots of a century-old Sequoia tree.

"The project maintains the detached character of the college's current buildings, allowing them to be read as separate elements, while introducing a contemporary building that conveys the past, present and future evolution of the college, university and city," said Zaha Hadid Architects in a statement.

"Its design weaves through the restricted site at St Antony's College to connect and incorporate the existing protected buildings and trees, while its stainless-steel facade softly reflects natural light to echo the building's context," added the firm.

The Middle East Centre was established in 1957 as the university's primary faculty for the study of humanities and social sciences in the modern Arab world. For the last 37 years it has been housed in a former rectory at 68 Woodstock Road. 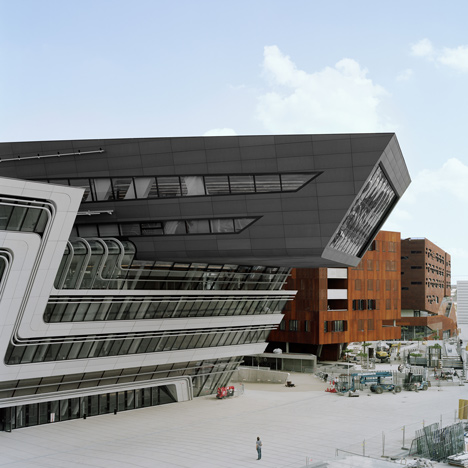 The new structure bridges the gap between 68 and 66 Woodstock Road, providing three above-ground storeys and an extra level in the basement. Overall, it offers 1,127 square metres of additional floor space for the centre.

Mirrored stainless steel clads the majority of the building, allowing it to reflect its surroundings. There are also large expanses of glazing – some sections function as windows, while others have painted backs.

The 117-seat lecture theatre is housed in the basement, along with separate archives for photography and paper documents.

Above this, the more public ground floor accommodates a multi-purpose gallery space that can be used for informal meetings and study. Glazing surrounds most of this storey.

The first and second floors are contained behind the stainless-steel facade, housing the majority of the storage, reading rooms and offices that comprise the library. This includes a total of 26 desks and 2,200 square metres of linear book storage.

Oak-veneer boards are combined with perforated acoustic panels to line the walls in several rooms. There are also 25 skylights across the roof that bring natural daylight into the facility.

The plaza at the building's entrance is paved with hexagonal granite tiles, while a new lawn doubles as a green roof above the auditorium.