SHoP Architects has teamed up with West 8 to design a four-block development, aimed specifically at attracting technology businesses and turning Miami into "Florida's Silicon Valley" (+ slideshow).

Conceived as an "urban campus", the district is intended to create a focal point for Miami's tech industry, providing collaborative spaces and offices for startups alongside established companies and big global businesses.

The apartments will include a number of "micro units" of 300 square feet (28 square metres) or less, designed specially for "young, creative urbanites" who would otherwise be priced out of Miami's housing market. According to the developer, the district will generate an estimated 13,000 jobs.

"The Miami Innovation District, expected to receive full city approval later this year, will be a dense, walkable, experience-rich new neighbourhood, bringing to Miami the world-class urban amenities that the global technology workforce increasingly relies on for inspiration and support," said a statement from SHoP Architects.

The centrepiece of the plan is a high-rise building called the Miami Innovation Tower, which will feature a "fully integrated active skin" with displays built into the facade that will broadcast public announcements, video art and advertising. 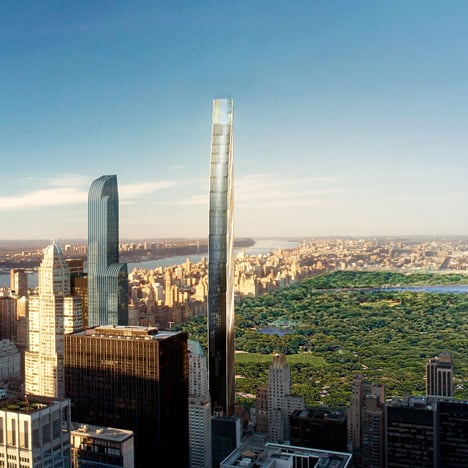 "Unlike traditional billboard signage, the mesh-like messaging technologies are in fact integrated completely into the complex, pleated form of the tower's exterior," said a statement form the architects. "The result is an ethereal, highly transparent surface, open to the slender concrete tower core and views of the city and the sky beyond."

The design for the tower also includes a public plaza and amphitheatre at ground level, as well as public observation decks, a sky garden and two restaurants.

The masterplan proposal is so large that the team needs to gain pre-approval for a Special Area Plan – a document outlining development guidelines for the project – which was submitted to the city earlier this year.

The masterplan is divided up into a series of levels, starting with the public streets, plazas and covered walkways.

"The horizon level will be dominated by an extensive green-roof landscape with outdoor gathering and cultural programming," said the architects.

"And the cloud level, the signature feature of the plan, will be a floating 'mixing chamber' featuring shared amenities such as daycare and tech support, informal work and exhibition spaces, and facilities for continuing education."

According to the architects, this "cloud" network of spaces will connect the taller buildings in the plan 200 feet (61 metres) above ground level.

"This is the arena in which serendipitous relationships can be made within and between the individual creative enterprises making their home here – a place designed to actively promote the chance encounters from which experience has shown true innovation arises," they added.

More than 2,500 parking spaces will also be integrated across the buildings that will make up the district.

"True innovation today requires the very thing that cities, at their best, have always provided: creative proximity," said the architects.

"Even as it continues its rapid development, the city of Miami does not currently offer significant urban environments that meet the necessary criteria. The Miami Innovation District is conceived with the goal of correcting this shortfall, giving the city the means for truly sustainable economic growth in this increasingly important sector."