Dropbear's video for Quack Fat, which is taken from the Australia-based DJ and producer's 2014 album Mereki, features animated recreations of classic video games – including Tetris, Space Invaders and Megaball – made from tapes and diskettes.

"I grew up listening to music on cassettes and Walkmans, so I thought it would be a nice idea to bring back the cassette and other retro things from my childhood and incorporate them into a music video," Dropbear founder Jonathan Chong told Dezeen. "I like the juxtaposition of Opiuo's new sound and the retro imagery."

Chong painted 240 cassette tapes and 108 floppy disks to make the video, which consists of over 2800 still images animated at 25 frames per second.

"I had to source a lot of cassettes from second-hand shops," Chong explained. "You'd be surprised that they were quite hard to find. I suppose cassettes aren't as popular as they used to be."

The floppy disks were easier to get hold of, however. 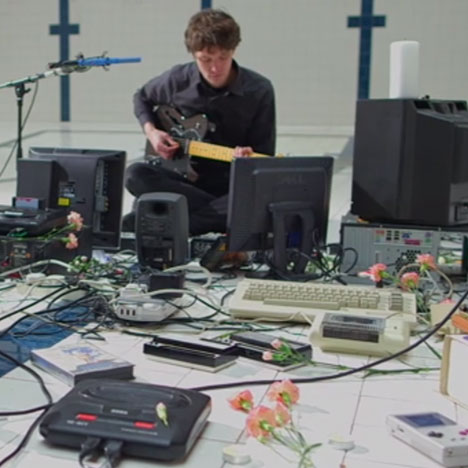 "I'm a big hoarder," Chong admitted. "Some of the disks were in boxes that I'd been storing for ages. All that hoarding finally paid off!"

The video game sections in the video are interspersed with sequences featuring a boombox and an old yellow Sony Walkman, which opens and closes in time to the music.

"I wanted to make an ode to those retro objects and also create a vibe that would match the energy of the music," Chong said.

"The yellow Walkman was perfect as a 'main character'," he added. "I've had many people tell me that they had owned that walkman when they were kids, so I think it really resonates."