This timber-clad villa by Stockholm studio The Common Office stands between the trees of a steep rocky slope in the Swedish countryside (+ slideshow).

The Common Office designed Villa Altona for a patch of woodland in Törnskogen – a locality to the north of the Swedish capital.

The building was conceived as a series of interconnected blocks.

This helps it to mediate between the levels of its site – which vary by nine metres from the lowest to the highest point – and to avoid the large boulders that define the shape of the plan.

The building is oriented on an east-west axis and presents large glass windows towards the forest. 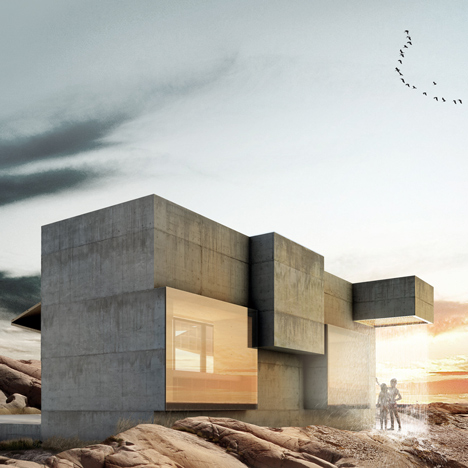 "The contrast between the suburban landscape to the south and the untouched forest to the north, gives the site its identity," explained the architects Joacim Bengtsson and Henrik Lundén.

"The two opposite characters of the site generated the the form, placement and colours of the house."

"The house creates a clear border between the two different site characters," they continued.

"To the south a traditional villa garden faces the neighbouring houses. To the north, east and west the house faces the untouched nature."

The concrete foundations and structure were cast in situ, so as not to impact too heavily on the landscape.

The whole volume was then clad in milled wooden panels, which were stained in different shades.

The blocks interconnect, creating large open-plan spaces on both the ground and upper floor.

A curving white staircase connecting the two levels rises up through the centre of the plan, below a large skylight.

It partially separates a lounge from the kitchen at ground level and provides access to two bedrooms.

A bathroom and master suite are separated from the core of the building by sliding partitions.

A decked pier extends out onto the forest floor from one side of the dining area to provide an outdoor space.

"The interior is almost one continuous room," said the architects. "The building units offset relative to each other creates smaller private spaces within the large room."

A metal grate that forms the first-floor landing allows light from the skylight overhead to filter through to the ground floor.

The stairs continue up towards the skylight, which retracts to provides access to a roof terrace planted with a mixture of sedum and herbs.