Thin blue strings are stretched between arch-shaped frames to create tunnels across the cloister garden of a French cathedral (+ slideshow).

The designers used taut strings to form enclosed passages along the existing pathways of the garden, which run diagonally from the corners to a central circle.

The strings are stretched between thin metal frames shaped like arches from different architectural styles.

"Arcs of all origins are linked to one another by a colourful woven structure that performs with light and mystery, revealing a light, dematerialised architecture," said Atelier Yokyok.

The shapes include a quadrant and a semicircular arch, as well as an ogee arch and a lancet arch – both typical of Gothic architecture. The latter echoes the pointed arches that surround the garden. 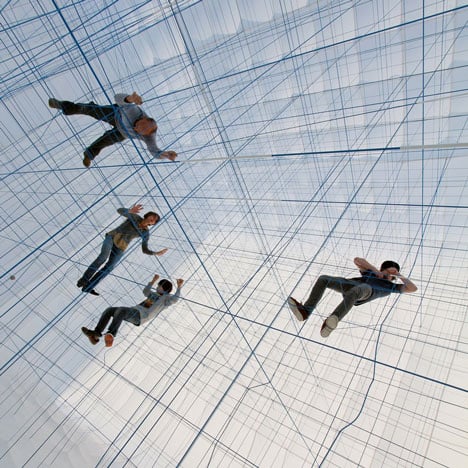 Two arches are positioned at either end of each path in non-matching pairs.

Arranged close together, the rows of strings merge the shapes of the arches and create semi-transparent coverings that visitors can walk beneath.

The edge of each inner frame is joined to its neighbour with more strings, forming a square fence around the circular planting feature at the garden's centre.

"The stroller is guided towards the centre of the lot: a secret cloister," said the studio.

Additional strings extend from the outer arches to sections of the cathedral building to help keep the structure stable.

The installation will remain in place until the end of June 2015. It is one of three winning projects in Cahors' landscape garden competition, organised as part of the Festival Juin Jardins Cahors 2015 that includes 25 open gardens around the city.