Located on West 21st Street in Manhattan, the Tina Kim Gallery sits at the centre of an arts district near the High Line park.

The two-storey, century-old brick building formerly housed the Casey Kaplan gallery, which moved out last year. SO-IL was hired to redesign the ground-level arts venue, with an emphasis on creating a new entryway.

"This project was a simple transformation of an existing gallery," said firm co-founder Florian Idenburg. "We wanted to make a more distinctive entry that pulls the public in.”

To achieve this goal, the firm recessed the main door and framed it with staggered bricks – a reinterpretation of the projecting architectural detail known as the corbel. 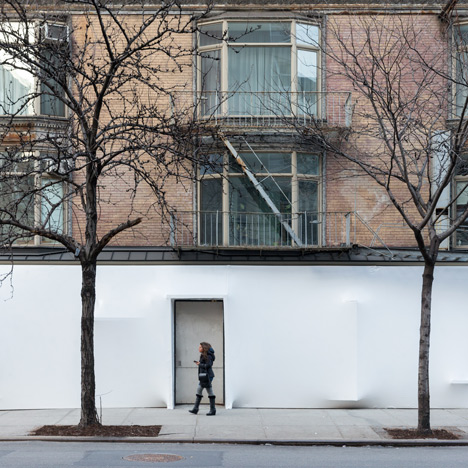 The former entrance, made of frosted white glass, was flush with the sidewalk. But the new composition "gently pulls the street inward, turning the rigid wall into an expressive moment," said the firm.

The 5,000-square-foot (470 square metres) gallery is devoted to showcasing contemporary work by established and emerging artists. It is associated with Kukje Gallery in Seoul, for which SO-IL designed a standalone building wrapped in metal mesh in 2012.

The interior was kept mostly as it was before – featuring polished concrete flooring, and both white and black walls. SO-IL removed one wall and relocated an office to the rear of the gallery.

The project was completed last month during New York's Frieze Art Fair. In 2012, SO-IL designed a permanent, 1,500-foot-long (457 metre) tent for the fair, which is held annually on Randall's Island in New York City.

The historic building that contains the Tina Kim Gallery has undergone numerous changes over the years. According to paperwork from the 1930s, the gallery space was once a petrol station.

"The current space is yet another layer of this ongoing history: re-contextualising pre-existing galleries and transforming the entrance to provide an unexpected experience of the familiar," said the firm.

A former industrial area, the Chelsea neighbourhood was transformed in the 1980s into the city's main arts district, with many of its warehouses converted into upscale art galleries. The High Line – an elevated old railway converted into a park – also passes through the area.

"This New York City neighbourhood is characterised by numerous spaces for art," said the firm. "However, the area's industrial past is still prevalent within the urban fabric."

Prior to moving to its new home, the Tina Kim Gallery was located within the nearby Chelsea Arts Tower, a mixed-use high-rise building.

The gallery earned attention last year when it placed a five-foot-tall (1.5 metre) teddy bear by South Korean artist Gimhongsok in a small Tribeca park. The sculpture, called Bearlike Construction, is made of bronze but appears to be made of stuffed garbage bags.

Photography is by Jeremy Haik.