Danish firm Schmidt Hammer Lassen Architects has completed a 30,000-square-metre library in Aarhus, Denmark, with a faceted metal-clad volume on top and a new train station underneath (+ slideshow).

Located beside the harbour on the east side of Aarhus, Urban Mediaspace is the largest construction project in the Danish city's history and the library – known as Dokk1 – is set to become the biggest in Scandinavia when it opens tomorrow.

Schmidt Hammer Lassen, which won a competition to design the complex in 2009, conceived the building as a stack of different volumes – a "polygonal slice" on top, a glazed building in the middle and a podium at the base.

This creates space for the library and a local services centre, as well as a dedicated station for the new light railway and a car park with an automated parking system.

"Dokk1 is not simply a building," said Schmidt Hammer Lassen senior partner Kim Holst Jensen. "It is a place for exchanging knowledge and opportunities and a multicultural meeting point that will change people's perception of the entire city."

"Dokk1 enhances this special setting with an architecture that creates an exceptional visual connection to the city – both from inside the building and out," he continued. 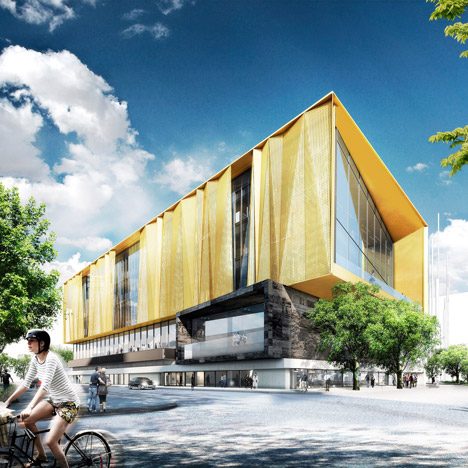 "Through this, we form an icon for the knowledge society, an icon that supports and stimulates creative collaboration."

There are four large staircases around the perimeter, which fan outwards to entice visitors to venture up to various entrances on the elevated podium level. The intention was for the building to have no clear front and back.

The glazed middle section houses the two main library floors, offering 360-degree views out over the water and the city.

These two levels are connected internally by a series of five staggered platforms, accommodating exhibitions, gaming, workshops, reading and events. Described by the architects as "a meandering path of activity," they lead directly into the children's section of the library.

To help maintain a sense of openness, there are holes in the floorplates throughout the interior. This creates regular double-height spaces, which become natural meeting points.

"Inside, the open layout creates visual connections between the various functions, and invites the visitor to be inspired by the vast amount of information that inevitably meets them," said Kim Holst Jensen.

"Openness encourages social interaction and the exchange of information," he added. "Dokk1 will become a vibrant space for people of all generations, interests and cultures. Our concept, with interweaving activities and functions, supports this synergy."

The uppermost floor accommodates municipal and other offices. This section of the building is clad with expanded metal, creating a reflective exterior. A narrow strip of windows runs around the entire perimeter.

The building's height was informed by its immediate surroundings, which include cranes and ships in the harbour, numerous five- and six-storey blocks, and the 96-metre-high spire of Aarhus Cathedral beyond.

Dokk1 is one of a series of library projects by Schmidt Hammer Lassen. The firm has recently completed two libraries in Canada, one in Halifax and one in Edmonton, and is also designing the replacement for the building wrecked after the 2010 and 2011 earthquakes in Christchurch, New Zealand.

The wider Urban Mediaspace project forms part of the major redevelopment of the Aarhus harbour, which also includes the construction of the Isbjerget housing complex, designed by a team including JDS Architects and CEBRA.

Three railway stations run along the edge of this zone. There is also a series of new bicycle paths, connecting with new public squares around the library and a cycle parking area with 450 spaces.

The project was completed in collaboration with Kristine Jensens Landscaping and engineering consultancy Alectia.