Consisting of 18 white dwellings clustered above foliage-clad shops, the 8600 Wilshire scheme will introduce "a new model for West Coast vernacular" to the low-rise sprawl of Wilshire Boulevard.

"In high-density cities, Modernist and Post-Modernist housing typically prioritised functions and formats over human relationships to the environment," MAD explained. "For 8600 Wilshire, MAD considers the possibility of a new model for West Coast vernacular amid the sprawling density of Los Angeles."

The complex is MAD's first residential building in the United States and could be its first completed project in the country, since work on the firm's George Lucas Museum in Chicago has been suspended amid ongoing legal disputes.

"MAD proposes a harmonious architectural space of human experience by placing residents in the spiritual landscape of nature," the firm explained.

8600 Wilshire will consist of a mixture of villa-style townhouses, villas, studios and condominiums set amid trees and arranged around an elevated "secret garden". 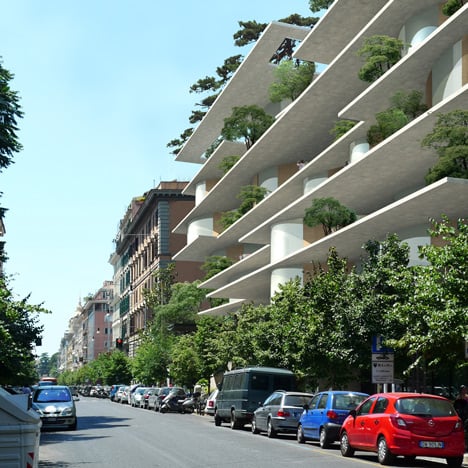 The village gradually rises in height towards Wilshire Boulevard, culminating in a cliff face that will be covered in a living wall of native drought-tolerant succulents and creepers.

The living wall is cut off at ground level, where the street frontage will be lined with glass-fronted commercial units.

Work is expected to start on the project in October.

Other MAD projects that explore ways of combining urban and natural typologies include a project to insert tree-covered terraces into a Rome office block and its "shan-shui city" schemes inspired by a traditional Chinese style of painting.

Yansong has taken the shan shui art form – which presents idealised landscapes of dramatic rock formations, waterfalls and lakes – and used it as a model for a series of proposals for mountain-like skyscrapers in Beijing, Nanjing and other Chinese cities.

"Shan shui you can literally translate as 'mountain and water'," said Yansong in a video interview with Dezeen last year. "In traditional Chinese culture there are a lot of paintings about shan shui, but now we're talking about a shan-shui city."

8600 Wilshire was this week named as one of the winners of the Design Concept category at the 45th Annual Los Angeles Architectural Awards, hosted by the Los Angeles Business Council.