This glass, steel and sandstone pavilion near Sydney protrudes over the edge of a natural dam to create a closer connection with its surroundings (+ slideshow).

The pavilion was designed by Australian architect Matthew Woodward for his family's 32-hectare estate in Somersby, one hour north of Sydney.

The building cantilevers 2.5 metres over a natural spring-fed dam to offer occupants a better view of the water, and is also surrounded by mature gardens. 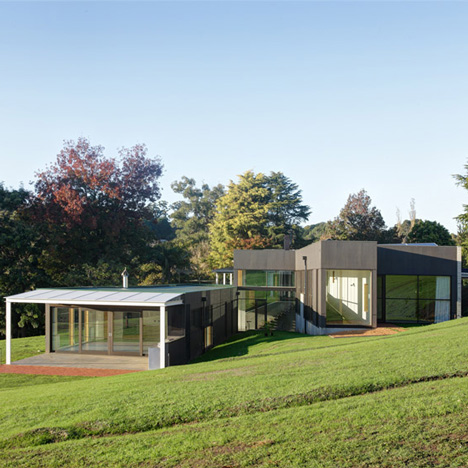 "The purpose of this project was really about a celebration of the landscape and place," Woodward told Dezeen.

"The balance of grounding and floating the pavilion in its setting emphasises the focus on the rural landscape. The pavilion doesn't seek to overplay its role in this scene."

Woodward developed the design while he was completing the final year of his architecture MA, after being spurred by discussions with his family.

"We often spoke about different opportunities to be explored on the property during walks," he said. "This part of the garden was special to us because of its seclusion and prospect, so the idea of building a pavilion here became very compelling."

The 72-square-metre pavilion is accompanied by a 36-square-metre external courtyard, creating a retreat and entertainment space for the family and their guests.

The building comprises a glazed structure, with a spa and living room located in the end that cantilevers over the water. The bedroom sits on the opposite side, while a smaller structure in the middle encloses a bathroom, kitchen and storage space.

Flexibility was intrinsic to the design of the rooms. The bed folds up into a wall so that the bedroom can also be used as a secondary, more sheltered living space.

The spa can be concealed with timber panels to create an unbroken stretch of floor in the living area, while glazed screens slide back to open the space up in summer.

"The orientation of the pavilion to the north-east captures the sun and responds to prevailing winds," explained Woodward.

"In the warmer months, the sliding glass panels open up to allow for natural cross ventilation, while in winter the thermal mass of the materials inside conducts heat from the sun to create a relatively constant internal climate."

A second shower was added in a discreet corner outside to give the family and guests another opportunity to interract with the surroundings.

The building took approximately eight months to construct. A composite steel frame was used for the main structure, with a concrete slab for the floor and roof, while concrete blockwork was used for the smaller inner core.

"The concrete-slab ceiling adds to the drama of the cantilever," said Woodward.

"By drawing the eye up, it inadvertently reinforces the feeling that the pavilion is floating above the ground, the dam, and the vegetation. Moreover, in-situ concrete is innately textural and full of memory, while also having the effect of being very minimal and precise."

Inside, natural and local materials were chosen to help the pavilion feel more rooted in its setting. The flooring is tallowwood, a native Eucalypt species, favoured for its durability in the spa area, as well as its consistent grain and blonde colour.

The inner core is clad in Somersby white sandstone, which is quarried locally and has a neutral, consistent appearance.

Hoop-pine plywood was used for the built-in bedroom furniture and the walls of the bathroom and storage areas.

"It creates a sense of warmth and intimacy in this small inner core, while contributing to the overall effect of restraint and minimalism," said Woodward.

"Kuma has a unique ability to create rational forms that that are intangibly true to place and the haptic sense," he added. "The integrity of his use of materials, structure, and atmosphere to respond to setting, programme, memory, and the human body, was a precedent in the ongoing design process during this project."

Photography is by Peter and Jenny Hyatt.