Dezeen and MINI Frontiers: Harvard University's Human Organs-on-Chips was crowned Design of the Year 2015 this week. Scientist Tony Bahinski explains how the chips could one day replace animal testing (+ movie).

"The problem with animal testing models is the ethics involved," Bahinski says in the movie. "But they are also not very predictive of the human response. The hope is Human Organs-on-Chips will be much more predictive than current pre-clinical models or animal models."

He adds: "Hopefully they will reduce the use of animals and, in the future, can replace animal usage."

Microscopic channels are moulded within the transparent, flexible plastic, which can be lined with living cells from different types of tissues and fed with fluids and gasses to mimic air and blood flow. 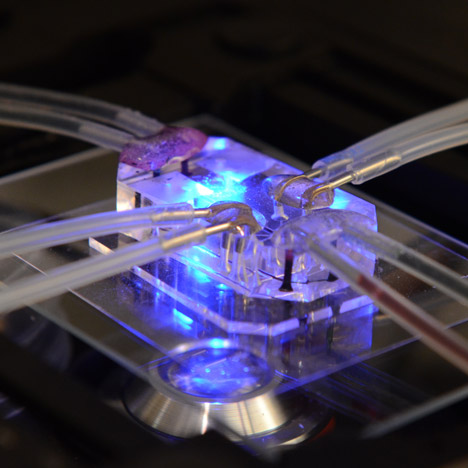 "We utilise different sources of human cells and introduce them into the plastic chips through ports," Bahinski explains. "Once the cells are incorporated into the chips they start to self assemble into the different tissue types."

"The first one that was developed was the Lung-on-a-Chip, which mimics the physiological breathing motion," Bahinski says. "We have vacuum channels on each side of the central channel, which stretch the middle membrane. That physiological motion really determines the function of the cells."

The Wyss Institute has also developed chips that replicate the gut, liver and kidney and is developing devices that mimic other organs such as the skin, nervous system and even the brain. The idea is that eventually all the chips can be linked together, so that the effects of a drug can be tested on different organs as it passes through the human body.

The first users of the chips will be pharmaceutical companies, Bahinski suggests, but he believes in future they will also be used by the cosmetics industry to conduct tests more ethically.

"The chips can be used where it's not feasible to test effects on humans," he says. "Pharmaceutical companies can look at drug safety – cosmetics and consumer products can be tested as well."

Human Organs-on-Chips was announced as the overall winner of the London Design Museum's annual Designs of the Year awards earlier this week. The project beat other designs including a proposal for clearing waste plastic from the oceans, a concrete building for a Chilean university and Google's self-driving car.

"We're ecstatic to win the Design of the Year award," Bahinski says. "I think the elegance of this design and its ability to mimic a very complex form and structure is really quite exciting."

This movie was filmed at the Design Museum in London. The music featured is a track called Hanging Out of Moving Vehicles by producer RyIm.

Photographs, motions graphics and laboratory video footage are courtesy of the Wyss Institute at Harvard University.