Microdevices that replicate the functions of human organs have beaten Google's self-driving car and a concrete innovation centre to be crowned Design of the Year 2015 by London's Design Museum.

The Human Organs-on-Chips project was announced as the overall winner of the annual Designs of the Year awards during an event at the museum's Shad Thames building this evening.

The Organs-on-Chips are designed to be used for purposes including drugs and cosmetics testing, as well as for the treatment of infections and inherited diseases.

"The team of scientists that produced this remarkable object don't come from a conventional design background. But what they have done is clearly a brilliant piece of design," said Design Museum director Deyan Sudjic.

"They identified a serious problem; how do we predict how human cells will behave, and they solved it with elegance and economy of means, putting technology from apparently unrelated fields to work in new ways. They have perhaps unintentional created something that for a lay man seems to symbolise the essence of life and also happens to be beautiful to look at." 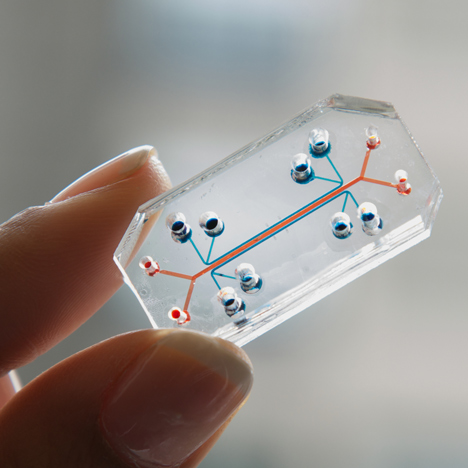 MoMA's senior curator of architecture and design Paola Antonelli, who put forward the project for the awards, called it "the epitome of design innovation – elegantly beautiful form, arresting concept and pioneering application".

Human Organs-on-Chips, which were nominated in the product category for the awards, triumphed over the shortlisted projects from the other five award categories: fashion, digital, architecture, graphics and transport.

These included Thomas Tait's Autumn Winter 2013 fashion collection, a proposal for clearing waste plastic from the oceans, a concrete building for a Chilean university, a campaign to promote misshapen fruit and vegetables, and Google's self-driving car.

"It incorporates technology and design to eliminate the problem of having to use animals to test a product," Kapoor added. "It feels like one of those questions of the future."

All 76 of this year's nominated projects are on show as part of an exhibition designed by Benjamin Hubert at the Design Museum, which runs until 31 August 2015. The winner of a visitors' vote will also be announced at the end of the exhibition.

Last year's Design of the Year award was controversially won by Zaha Hadid's Heydar Aliyev Center in Azerbaijan – a decision that was questioned by critics due to the country's human rights stance.

Other previous winners from the award's eight-year history have included the UK's Gov.uk website, the energy-saving Plumen 001 lightbulb and the London 2012 Olympic Torch.