Pale oak staircases ascend to a pair of mezzanine floors set in the rafters of this Melbourne residence, which has been renovated by local architect Wilson Tang.

Tang was asked by two of his friends to reorganise the layout of their single-storey home, which sits in a cul-de-sac in the Melbourne suburb of Richmond.

Named Theresa St Residence, the renovation is the first built project by Tang's Melbourne-based studio Sonelo, which he established in 2014. Working to a modest construction budget, the architect described it as an "exercise in restraint".

Steep ladder-like staircases providing access to two mezzanines were replaced with more user-friendly timber steps, while a hallway that dominated the ground level was converted into a kitchen and dining area.

"We were dazed by what presented before us," said Tang. "Upon entry, we were greeted by a tripartite layout with a rather wide hallway barrelling through the gut of the house into the living room." 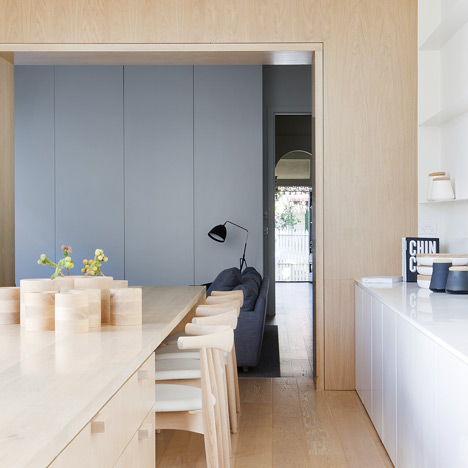 "Two clumsy stairs ascended from the hallway to mezzanines," he continued. "Spaces were dim and disjointed. Mezzanines were low in headroom. Bathrooms were bunker-like, far removed from the loft interiors it boasted."

The two staircases are positioned in the rear corners of the residence, enclosed by solid white balustrades. Their timber steps match the engineered oak floors, giving continuity to the various spaces.

"The design approach to the stair seeks to not impede on the scale of space," Tang told Dezeen. "The new staircases are gentler in slope."

One of the staircases leads to an upstairs bedroom, positioned directly above another one on the ground floor, while the other provides access to a study above the laundry room and garage. Both rooms sit among grey metal roof trusses.

The property's entrance hall is at the centre of the plan. Large circular coat pegs create polkadots across the white wall of the space.

Just beyond, the kitchen, dining area and bathrooms all occupy double-height spaces.

A marble dining table extends from one side of a steel-wrapped kitchen island and stretches almost to the door of a living room at the back of the house.

Pastel green tiles provide splash-backs in the kitchen and laundry room, and cover the walls and the floors of the bathrooms.

"Subtlety is the one word Theresa St Residence evokes," said Tang. "The neutrality, the simplicity, and the continuity of the palette are crucial in this project. They make the house feels spacious and light filled."

Richmond has been the target of intensive redevelopment since the 1990s and many of the area's small brick houses have been replaced or extended. Other examples include a narrow wooden residence by local studio Edwards Moore and an extended home by architect Andrew Maynard.

Photography is by Peter Bennetts and Cameron Conwell.