Graduate shows 2015: this student-designed house in Ghana pairs rammed-earth walls with translucent screens made from used water packaging, demonstrating how traditional construction can be combined with recycling (+ slideshow).

Nkabom House was designed by Anna Webster, a fourth-year architecture student at The Cass, London Metropolitan University's school of art, architecture and design.

The original concept was a response to a competition inviting proposals for a single-family house to be built in a remote village in Ghana's southern Ashanti region.

One condition was that it had to use mud as one of the main construction materials. Webster chose a traditional African technique using compacted earth – a method that is becoming increasingly popular in contemporary architecture.

The competition was organised by non-profit organisation, the Nka Foundation, which focuses on promoting humanitarian activities through the use of the arts.

Webster's entry was selected to be constructed at the Abetenim Arts Village, a learning centre operated by the Nka Foundation that offers residencies to local artists.

In May this year, Webster and two friends from her undergraduate studies at Manchester University – Eliana Stenning and Phoebe Stock – travelled to Ghana to conduct a 10-week workshop at the centre, during which they refined and eventually built Webster's design.

During the workshop, a team of eight international participants and 12 locals spent time learning about the Ashanti culture and traditional building methods, including various forms of mud construction. 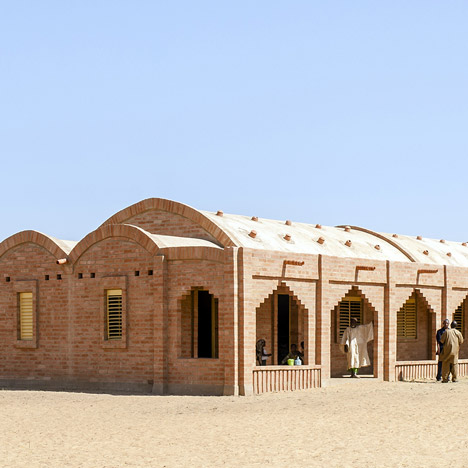 The building's design evolved as the team gained a better understanding of the site conditions, and the materials and local labour available to them.

Throughout the process, they aimed to combine the traditional construction principles they learned with modern ideas relating to form, construction and the intelligent reuse of waste materials.

"The design retained the original driving concepts of the competition entry focusing on reinventing materials which are often discarded or overlooked," Webster told Dezeen.

"We aimed to overcome the negative associations of these materials and move away from the primitive image of building with earth by applying a modern design aesthetic."

The first step in the construction process was to level and stabilise the site by compacting loose earth and introducing gabion cages filled with stones to protect the concrete foundations.

Walls of rammed earth  – a building technique that involves compacting mud in layers – were then erected in three stages, with windows and doorways incorporated during the process.

A natural and breathable sealant made from the starch of the edible cassava plant was applied to protect the surfaces from moisture.

A key aspect of the project was to find a practical use for waste packaging, including plastic sachets used to distribute clean water in the region. The sachets were collected by households in the village and woven by school children to create louvres fitted to windows.

The packaging was also incorporated into mesh grills inserted in some of the facades and used to make translucent panels that form part of the roof.

"It was especially rewarding to address this issue of waste plastic," Webster added, "as rubbish collection is not practised in the village and these water sachets are otherwise left in piles in the bush and around the village."

The outcome is a small house built for just under £5,000 that is now occupied by the village's community coordinator and headmaster of the local school, along with his wife and baby daughter.

The project's main goal was to demonstrate the potential of traditional mud construction in the form of a prototypal building, as well as promoting an exchange of knowledge, skills and ideas between different cultures.

"It is our hope that the future projects in Abetenim will learn from the successes and failures of Nkabom house, adopting and developing the systems it employs," said Webster.

Webster completed Nkabom House for the Free Unit at The Cass, under the direction of tutors Robert Mull, Catrina Beevor and Peter Carl. Unlike typical masters units, where students work to a brief, the Free Unit allows any built project to contribute towards a student's master's degree.