Both original geometric tiles and contemporary machine-milled latticework decorate the reception of this boutique hotel in Penang, Malaysia, which occupies a row of traditional shophouses (+ slideshow).

Built in 1919, the structure previously contained five shophouses but has now been converted into a series of contemporary guest suites.

Shophouses are a building typology that is common in cities across south-east Asia, where owners traditionally lived above their shops. They typically comprise a shopfront that opens directly onto the street and apartments arranged over one or two storeys above.

Loke Thye Kee Residences retains this traditional format, with the street-level facade divided into units and fronted by a colonnaded walkway. Signs above the doorways of the ground floor suites give the impression that they are still actively trading.

According to Ministry of Design director Colin Seah, the configuration of traditional shophouses lends itself to hotel conversions as the units are already appropriately sized for residential occupancy. 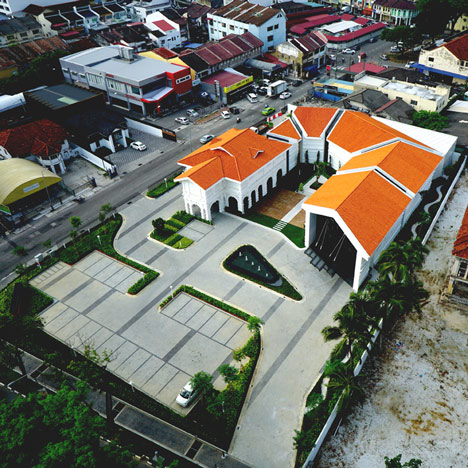 "The upper levels of shophouses were traditionally used as residential dwelling spaces, so the width and dimensions of each shophouse bay is well suited for the hotel or serviced apartment typology," Seah told Dezeen.

The restoration of the block of shophouses involved completely replacing the roof and floors, although the main structure remained in good condition.

The articulation of the windows and doors on the street frontage and its period ornamentation were retained to preserve a visual connection with the building's heritage.

At the rear of the shophouses, a small alleyway that passes beneath a row of arches now provides access to private gardens outside guest rooms on the ground floor, and staircases leading to a balcony and the first-floor rooms.

In the reception area, an original geometric tiled floor is complemented by the machine-milled pattern applied to latticework that covers the ceiling and one wall. Elsewhere, original tiles were preserved wherever possible, or replaced with similar designs.

"The latticework was inspired by the intricate tile patterns that are typical of the shophouse typology," said Seah. "The idea was to continue the tiling pattern three-dimensionally, but in a more abstracted and subtle way."

Inside the rooms, existing brick walls were left exposed to provide a textural contrast with the modern furniture, including glass wardrobes, chrome mirrors and cantilevered desks.

"The piece de resistance for the interiors was the original brickwork party walls," said Seah. "They provided lovely texture and a foil against which we placed our modern and sleeker interventions."

Ministry of Design also recently added a contemporary extension to a 100-year-old building nearby, echoing the same profile and materials from in the original structure in the new addition. The firm described this as a "cookie cutter" approach.

The renovation and conversion of the shophouses was tackled with a similar attitude – with a focus on the balance between retaining integral original features and introducing details that make the spaces appropriate for modern living.

Seah said he was influenced by the decor of Penang in the early 20th century, and particularly by the 100-year-old Loke Thye Kee restaurant next door, which is being redeveloped by the same owner.

"We believe that heritage isn't just a moment in time rooted in the past, but that it is a continuum of time," he claimed. "Armed with this philosophy, we sought opportunities to create this sense of a continuum and dialogue between the past, present and future."

"We feel that this contrast allows the old to not feel distant or historic, but living and connected to the present," he added.

Other shophouse conversions completed in recent years include a pair of live-work units in Bangkok and a house and a swimming pool in Singapore.