Graduate shows 2015: Royal College of Art graduate YunTing Lin has created a new material from plant fibres and naturally fermented cellulose, and used it to form a storage system and speakers (+ slideshow).

Nanocellulose Fibreboard is a non-toxic, 100 per cent recyclable and 100 per cent biodegradable material made from a composite of plant fibres, such as flax, bound together using nanocellulose – a fibrous substance created by bacterial fermentation.

The two materials are mixed with water and then compress-moulded into the required shape.

"Eco-friendly material doesn't need to be boring – it can be desirable," explained the Taiwanese designer.

Bacteria and other microbes like yeast and algae are increasingly being used to grow materials. Designers such as Suzanne Lee have used microbes to produce types of fabric in vats of liquid, which she turned into items of clothing, while a biologist and a designer are currently developing a bacteria and yeast "micro-factory" to be used at home. 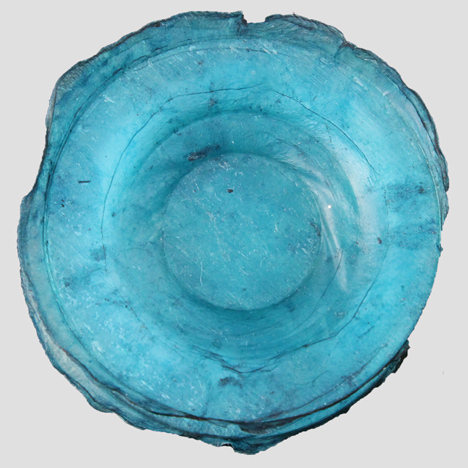 Lin created three products to demonstrate the potential of his material: an interior construction panel, a modular storage system and Bluetooth speaker.

"There are so many new sustainable materials out there, but sometimes they don't look attractive, so I started to wonder about the possibility of having a material that could be eco-friendly, beautiful and easily accessible," he said.

The ability to vary the density of Lin's material enables the production of a low-density version with acoustic and thermal insulation properties, which make it suitable for interior construction.

Coloured fibres can be used to control the final hue of the interior panels, without the need to paint their surface or add additional materials. Alongside interior construction panels, furniture is one of the most common uses for fibreboard products.

Seeking to demonstrate his material's potential to replace fibreboard, Lin designed and made a modular storage system comprising single box units jointed together with dowels that enable free rotation.

Mushroom-based modelling kit allows users to grow their own designs

"Its sustainable production and recyclability could transform the environmental issues that current fibreboard causes," said Lin, who studied on the RCA's Design Products course. "Unlike MDF and chipboard, which require a laminated skin for decoration, Nanocellulose Fibreboard features a versatile pattern."

"The manufacturing process requires less energy than producing plastic, therefore I believe Nanocellulose Fibreboard could be widely used as a casing material for consumer electronic products," said the designer.

The US consumes over 500 million square metres of MDF and particle-board every year.

Lin's new material aims to overcome problems associated with MDF, such as a reliance on wood, the inability to recycle it, and the release of urea-formaldehyde from the resin used to bind the fibres, which has been linked with cancer.

As it uses similar manufacturing process to MDF, Nanocellulose Fibreboard could be produced in existing MDF factories with a few simple alterations to the machines, according to Lin.

The project is being presented at the RCA's graduate show in London. Show RCA 2015, which runs until 5 July, also features a spiral staircase that straps to any tree trunk and a "power glove" that can be used to sculpt hard materials like stone and wood by hand.