Japanese architect Yoshihiro Yamamoto has sandwiched a house with a width of just 3.4 metres between a pair of existing properties in Osaka (+ slideshow).

Named Kakko House, the slender residence provides a home for a couple and their child in one of the many densely built-up neighbourhoods of the city, which is one of the most populated places in Japan.

Working with a site area of just over 35 metres, Yamamoto had to plan the building carefully to ensure none of the spaces appeared too cramped. To achieve this, he gave the structure a split-level plan with a staircase in the centre. This minimised the need for corridors, ensuring that all space is used efficiently.

"We made six types of floor in one box," explained Yamamoto, whose previous projects include a four-metre-wide house in Kyoto.

"Residents can enjoy the movement of the upper and lower floors as a sequence of spaces with different characteristics, rather than simply seeing [the layout] as a constraint."

Narrow houses have become commonplace in Japan, where they are referred to as eel's beds or nests. They often boast double-height living spaces and high-level windows to allow plenty of light to filter in – features that are both included in Kakko House.

The building also includes an exposed steel structure, which allowed valuable centimetres to be shaved off the thickness of the walls.

"You do not feel the narrowness of the living room in proportion to the frontage," said the architect.

From the street, residents enter the house via a sheltered driveway, which extends back into the centre of the site to create enough room for one of the clients to work on his motorbike. 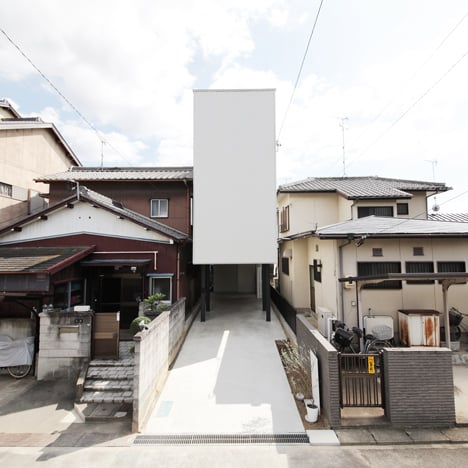 The entrance leads directly through to the staircase, providing easy access to the five other levels.

The staircase itself is built from steel with perforated treads that allow light through. The holes have been made as small as possible, to ensure fingers can't get trapped in them.

A combined living and dining room with a kitchen at the rear is located on the first floor, at the front of the house. The high ceilings in this room made it possible to add a large window, facing down to the street.

When residents need more privacy, there are three sets of curtains that allow varying levels of transparency.

"Incorporating the large opening and the south-facing roof terrace allows sunlight in to the entire house, but you can adjust the privacy according to the time and applications," said Yamamoto.

The two bedrooms are tucked away at the rear, with one just above ground and the other below. The bathroom is on the level above, with a large window that faces out to a small rooftop terrace.

Japanese cedar flooring was added throughout the house, while the terrace has a surface of square ceramic tiles.

In the kitchen, stainless-steel countertops are combined with cabinets made from lauan – a low-cost plywood.

Photography is by Keishiro Yamada.