Israeli architects Pitsou Kedem and Irene Goldberg have created a series of nature-influenced products for the home, including a shelving system that references a rock formation and a sink based on an iceberg.

Kedem and Goldberg designed the shelves, sink and mirror as the first three objects from a collection that will eventually also include tables, chairs and other items for the home.

"As architects we design spaces for people – spaces that promote a sense of place, calling their visitors to linger," said Kedem, whose architecture projects in his native country include a concrete 1950s-inspired home built for his family. "We created Object to complete this experience."

The architect installed the Object items in another of his buildings: a house near Tel Aviv shaded by perforated weathered steel screens. 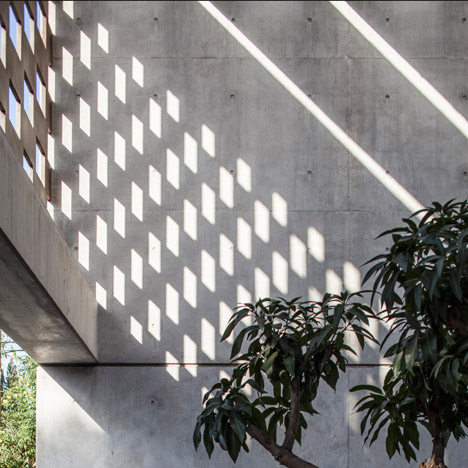 The freestanding piece has no back – enabling it to be accessed from both sides and used as a room divider.

Its design is based on rock formations with holes in them, which are solid but also traversable. "We drew our inspiration for the collection from nature – natural phenomena and organic objects," Kedem told Dezeen.

"For the sink we drew upon the fascinating formations of icebergs – their mass, their colour and their material," he said of the combined sink and shelf they have named Iceberg.

Made from one solid slice of Italian white stone attached to the wall, a glass front contains the water.

"Like a floating iceberg, its white surfaces and elegant lines transform from plains to a mass as we move around it, changing our point of perception," he added.

The Last Leaf is a double-sided circular mirror suspended from a painted iron pole, representing a droplet of water on the furthest leaf on a branch.

The mirror revolves around its pole as well as its own axis, presenting a different reflection scale on each side. Its movement reveals the red colour of the inner frame.

"The design of our objects is a playful dance between masses and plains, a constant motion between volume and void," Kedem explained. "We realised we needed to create everyday objects that enrich the daily rituals of our lives. We believe that adding a smile to well-formed architecture every now and then is a necessary gesture."

Architects have long dabbled in product design, using it to experiment with their signature styles at a smaller scale.

Examples include Norm Architects, which collaborated with Note Design Studio on the Patchwork Marble Table for Menu; and Zaha Hadid, who has recently added a range of stools and a bowl designed to resemble ice formations to her collection of furniture for London's David Gill Gallery.