The front of this family home in South Korea comprises three blank white blocks, designed to shield views from the house opposite, while the rear is glazed to open it out to a protected garden and balcony (+ slideshow).

172M2 House was designed by JMY Architects for a couple in the South Korean city of Gyeongju, who wanted more space to raise their two young children.

To do this, they swapped the apartment they lived in previously with a site formerly owned by one of the couple's parents.

"They wanted to live in a detached house with a garden, so they decided to give their apartment to the parents, and knock down the parents' single-storey house, where the client had also grown up, to build a bigger one," architect Jae-min Yoon told Dezeen.

To make better use of the space, the architects set the house back two metres from the northern boundary to create an entrance passage at the side, which leads to the garden at the back. 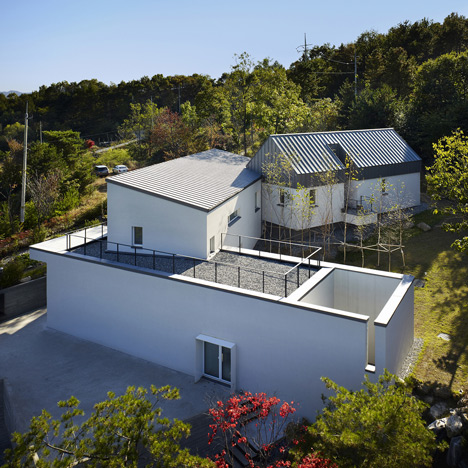 "In the previous layout, the garden was at the south entrance, and the house was pushed up to the northern boundary, which created lots of dead space," said Yoon.

The architects enclosed the ground floor and garden in tall white walls to maintain privacy and focus the views up, rather than out.

"The intention was to allow the family to see the sky, which is the only scenery the house has," said Yoon.

By contrast, the upper floor features a south-facing balcony and terrace stretching across the width of the house, which faces the adjacent building's roof, so neither property's privacy was compromised.

"Against new development in Korea, which is creating a stream of standardisation, we wanted this house to show the possibility of a small site in an old downtown area," Yoon added.

This is not the first small site that JMY Architects has designed for. The studio's other projects include a five-storey shop and home, squeezed into a five-metre-wide urban plot.

The upper floor of 172M2 House had to be set back from the street to avoid overshadowing and overlooking surrounding houses, so slot windows and skylights were added to bring more light into the building.

The ground floor has an open-plan kitchen, dining area and living room, plus a separate bathroom and utility room on the side where the house juts out to support the terrace above.

The living room is sunken slightly lower than the other spaces to give it more height and define it as a separate area in the home.

"By making the living room lower, we created the effect of sitting in the land," said Yoon. "The edge of the room also acts as a bench for sitting, and the space beneath it provides more room for bookshelves."

The upper floor has two bedrooms and an open-plan family room in between them, which is used as a play area but could be closed off to create a third bedroom in the future.

"The family room on the upper floor and the living room on the ground floor are designed as flexible spaces," said Yoon. "Both can be divided into separate rooms by installing walls and doors if needed."

Oak flooring was added in the living spaces, and birch plywood was used for the walls.

"We chose oak because you can feel its texture," said Yoon. "In Korea people live with their shoes off, so contact with floor materials was important."

"For the walls, we chose birch plywood so that they appear like an extension of the floor, and give the living space an identity," he added. "Wooden walls are also easier to maintain than white walls."

The house was built with reinforced concrete and covered in white silicone paint to give it a weather-resistant, low-maintenance exterior.

"The client wanted a modern, simple house, so we thought a white exterior was most suitable for this – it shows the clear shape of the house," said Yoon.

Work on the house was completed in 16 months, with 10 months spent on the design and six months on the construction.

Photography is by Joonhwan Yoon.